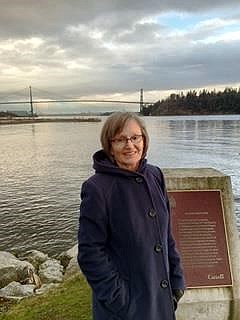 We said goodbye to our beloved Mom, Nana, Wife and friend Kathleen Nadine Sorochan (née Hancheruk) on February 5th, 2022. Kathy was born on May 31, 1945 at Lamont, northeast of Edmonton, Alberta. Her formative years were spent on the family farm in Wostok, Alberta with her mother Nancy, father Harry and brothers Edward and Jim. Kathy’s earliest days were spent running amongst the bramble fields and helping her family with the daily duties on the farm. While the family was never financially rich, they were rich in love and always well-fed and had a fully stocked pantry to get through the cold prairie winters. Kathy attended high school in Andrew, Alberta and left for Edmonton to attend the University of Alberta, from where she graduated with a Bachelor of the Arts degree. In 1968 she was attending a noisy party where she met Donald Sorochan, who joined her for a peaceful walk in a pumpkin-less former pumpkin patch. They never looked back, as they spent the next 54 years together, including 51 years of marriage. Don and Kathy married in 1970 and lived in the west side of Vancouver while Don finished his law degree at UBC, completed his articles and was called to the B.C. bar in 1972. Also in 1972, they settled in the Deep Cove area of North Vancouver, where they have remained. It was in this home that they welcomed and raised their three sons Neil, Kevin and Craig. For many years in the 80s and 90s, the family spent summers sailing around the Gulf and San Juan Islands on their 27 ft. Catalina sailboat, the Adaro. Favourite ports included Friday Harbor, Sucia Island, Pender Harbour and Sidney Spit. Winters and Spring were busy with the kids in school, skiing, and countless trips to hockey rinks and baseball fields around the Lower Mainland. Kathy volunteered to organize tournaments for the North Shore Winter Club Minor Hockey Association and the Mount Seymour Little League and assigned game officials for those organizations and the Pacific Coast Amateur Hockey Association. Kathy is known throughout the world thanks to her efforts as the Secretariate administrator and a conference planner extraordinaire with the International Society for the Reform of Criminal Law (ISRCL). Kathy was meticulous in her organizing skills, ensuring that the Society and its conferences in Canada, Barbados, Malta, the Netherlands, Australia, South Africa, England, Scotland and the USA were able to run smoothly each year. The ISRCL recognized Kathy’s contributions by awarding her the Society’s Gold Medal at its Malta Conference in 1999. The ISRCL and the UBC-based UN Institute, the International Centre for Criminal Law Reform and Criminal Justice Policy (ICCLR) also recognized Kathy’s contributions when they established a Scholarship Award in Kathy and Don’s names. The scholarship is open to students at Simon Fraser University and the University of British Columbia for studies in the areas of international criminal law, criminal law policy and criminal law reform. Kathy was also a dedicated community volunteer, committing countless hours to numerous charities, including the Make-A-Wish Foundation and with the North Vancouver School District. In recent years, Kathy spent much of her time as Nana to her grandchildren Thomas, Eliana and Fiona who spent several days a week with her after school. Each grandchild was able to develop their own routines with Nana, including baking countless batches of cookies, creating hundreds of art projects, and playing intense games of mini hockey in the hallways of the family home. Kathy was always kind and thoughtful, and she never missed an important date by sharing her love with family and friends, usually with several cakes to mark each special occasion. Kathy was a unifying force in the family and she loved her sisters-in-law Rose Hancheruk and Josephine Gozelny, her cousins Al Lakusta and Christine Bazylewich, as well as Rowan Healey. In recent years, Kathy and Don were able to travel to baseball spring training in Arizona, to Europe, Australia and to her favourite place to visit, Hawaii. When the Palliative Care doctor at Lions Gate recently asked where she wanted to die, she promptly responded, “Hawaii.” While she wasn’t able to return there, she was fortunate enough to receive amazing care from the staff at Lions Gate Hospital in the ER and Palliative Care wards. It was truly a full cycle of life when she passed away at Lions Gate Hospital where her three children and three grandchildren were born. She was surrounded by her immediate family who were fortunate to be able to share their love with her until the end. Kathy was predeceased by her parents Harry and Nancy Hancheruk and her brothers James and Edward Hancheruk. She is survived by her husband Don, her sons Neil, Kevin (Josephine) and Craig, her grandchildren Fiona, Eliana and Thomas, as well as her nieces and nephews Shane, Jason, Sandra and Karin. In lieu of flowers Kathy requested donations to the Lions Gate Hospital Foundation. Donations in her memory to the Don and Kathy Sorochan Scholarship Fund at the International Centre for Criminal Law Reform and Criminal Justice Policy are also welcomed. A celebration in Kathy’s memory will be held later this Spring. ВІЧНАЯ ПАМ'ЯТЬ ETERNAL MEMORY Fond memories and expressions of sympathy may be shared at www.firstmemorialnorthvancouver.com for the Sorochan family.
See more See Less

In Memory Of Kathleen Nadine Sorochan