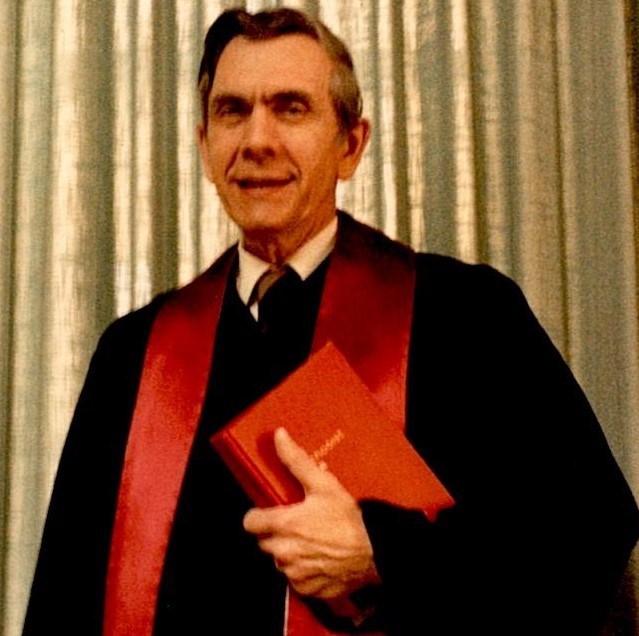 Reverend John E. Post, who died on Monday March 8th was born in Norwich, CT on September 22, 1921. He was the son of the late John Palmer Post and Dorothy Church Post. His wife, Gloria C. Post, predeceased him in 2014. Educated in local schools, he was a graduate of the Norwich Free Academy. After being employed by the Norwich Savings Society as a teller, and in charge of the public school savings program, Mr. Post volunteered to serve in the military during World War II. He was discharged in 1945 as a Master Sergeant, following service in England, France and Germany. After being awarded the Bachelor of Arts degree by the University of Connecticut and the Master of Divinity degree by Hartford Seminary, he was ordained as a United Methodist clergyman. Reverend Post was pastor of Methodist congregations in Baltic, Versailles, Norwich, Bolton, Stafford Springs, Crystal Lake, North Manchester, Burnside in East Hartford and New London. He also served congregations in Fitchburg, Westfield, and Pittsfield, Massachusetts. For six years he was Superintendent of the Connecticut East District of the United Methodist Conference. He was elected as a member of the National General Conference of the denomination. For several years, starting in 1965, he was a trustee of Hartford Seminary and was Secretary of the Board of Trustees for six years. During his pastorate Reverend Post received an ecumenical award for his service to the poor and homeless of Pittsfield and he was an active member of a coalition of Norwich community social workers who provided assistance to the needy and homeless. For some years he was President of The Beacon Trust, a Christian philanthropic organization which sponsored a study and retreat center on the grounds of the Willimantic Camp Meeting Association. After retirement in 1992, Reverend Post continued to preach and lead Bible study classes. In 2002, Reverend Post and his wife Gloria moved to Covenant Living of Cromwell. The residents of this wonderful Christian community became their second family. They soon became active participants in the life of the community including visiting those unable to leave their apartments, participating in and leading Bible study and the Fellowship groups and working at the community store. Reverend Post played leadership roles at Covenant of Living of Crowell including a term as president of the resident council. He continued many of these activities after Mrs. Post’s death. Reverend Post was a direct descendent of John and Thomas Post, two of the founders of Norwich in 1659. He was a member of the Society of the Founders of Norwich. Reverend Post, his son John, and his brother Avery, were present and participated in the 350th anniversary celebration of the founding of Norwich in June 2009. Reverend Post leaves his two sons John C. Post and wife Liz of South Windsor, and William A. Post and wife Judy of Coventry R.I., three grandchildren Stephen Post and wife Jennifer of Cromwell, Heather Lussier and husband Alan of Coventry R.I. and Megan McNamara of Prospect, and four great grandchildren Michael and Matthew Lussier and Bryce and Avyn McNamara. He also leaves his sister in law Margaret Post. He was predeceased by his two brothers Reverend Avery D. Post and Attorney Richard C. Post. A graveside service will take place on Saturday, March 20th, at 1:00 p.m. at Maplewood Cemetery in Norwich. The family plans to have a memorial service at some later date. The family would like to extend a very special thank you to the staff of Pilgrim Manor and the Assisted Living section of Covenant Living of Cromwell for their loving care and commitment. In lieu of flowers, memorial gifts may be made to Lee Memorial United Methodist Church Organ Trust Fund, 294 Washington Street Norwich, CT 06360 or to the Benevolent Care Fund, Covenant Living of Cromwell, 52 Missionary Rd, Cromwell, CT 06416.
See more See Less