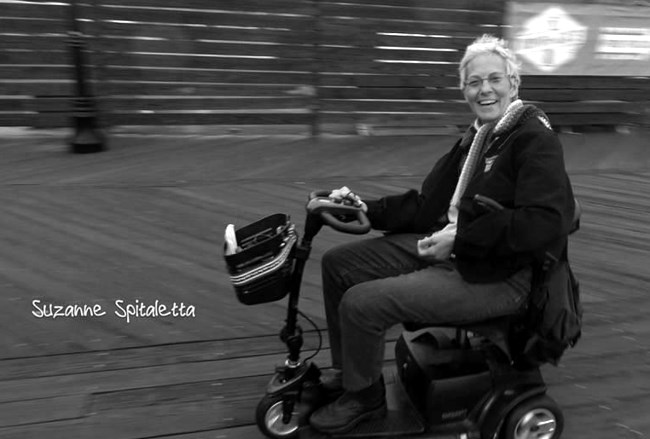 Penelope Gnesin, daughter of Oscar and Sylvia Gnesin, devoted most of her adult life to the practice of spiritual growth and expressions of gratitude. Her wisely composed affirmations of love began with those closest to her heart, but she then encircled all yearning for calm and freedom with her relentless determination. Her last earthly breaths, on the evening of February 12, 2019, were no different. Penny was born on 9/1/60, into a life she would share with older siblings Philip, Mark, Fern, and her adopted sister, Surita Lederman. Penny spent much of her life in love with her life partner of 23 years, wife for 20 years, Sue Fulton. They celebrated their vows twice. First, in a 1999 Commitment Ceremony at the Morristown Unitarian Church, then, on December 1, 2012, in a historic marriage at the West Point Cadet Chapel - where Penny conducted the choir in a closing, rousing spiritual of faith and promise, The Welcome Table, with her bride singing the lead. She was a graduate of Long Branch High School in 1978, and Rutgers (Cook College) in 1982, with a Major in Psych and Minor in Music. Penny worked for 14 years as a Project Manager at AT&T while gathering the skills she needed to foster physical and emotional healing in others. In the 1980’s she became the first Reiki Master in New Jersey, and formed a volunteer group, together with Hyacinth AIDS Foundation, to support and embrace the HIV/AIDS community. Penny founded and directed the a cappella women’s chorus “Womansong” in 1988; in 1995 the group became Olympia’s Daughters. They performed all over the eastern US and made five recordings of songs of purpose-songs of empowerment, pride, and praise. Penny’s holistic healing practice grew, as did her breadth of research and proficiencies, to include Acupressure, Cranial-sacral Therapy, Energy Medicine, Energy Psychology, and more. Penny treasured communication with all she met, whether they were new clients in need of relief, or her beloved “sunrise-photo-text-message” team. She infused conversations with frequent laughter, two-handed exaltations, and perpetual hope. iHeart Radio provided Penny another venue to touch the hearts of friends and strangers. She hosted over 80 episodes of “Little Miracles with Penelope” from 2017-2019, each one meticulously prepared for and prayed over. Penelope Gnesin lived a life of dignity and perseverance. With outstretched, conductor’s hands she orchestrated notes of both effervescent praise and succinct motivation. She left little doubt which one she felt you needed at any specific time! For all who knew and loved Penny she was, and will always be, a damn fine reason to smile and feel forever blessed.
See more See Less

In Memory Of Penelope Gnesin