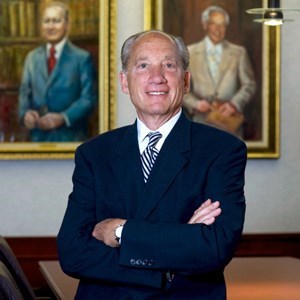 Richard Ansell, Esq., son of the late Leon and Doris Anschelewitz and brother of the late and great David Ansell, was born on October 28, 1942, in Neptune Township, New Jersey. He passed away peacefully at home following an unexpectedly long and surprisingly pleasant battle with cancer. Richard is survived by his absurdly loving wife of 38 years, Debbie; four children, Caroline, Margaret Podell (Lance), John, and Michael (Stephanie); five grandchildren, Ethan, Mallory, Gillian, Ryder, and Mason; two brothers, Robert and Jack; his first wife and lifelong friend, Connie; and an unaccounted-for number of people whom he offended throughout his life due to his love of sarcasm and off-color jokes, all of whom loved him dearly and will always remember his compassion, charm, wit, and steadiness on his feet. Richard received both his bachelor’s degree and law degree from the University of Virginia, quite a feat for a Jewish boy from New Jersey in the 60s. He cherished his time there, especially his fourth year living on “The Lawn.” Richard practiced law for over 50 years, spending his entire career with the firm co-founded by his father and now known as Ansell Grimm & Aaron, continuing what became a long trend of nepotism. He started as a jack of all trades and eventually focused his career on civil litigation. During his many years of practice, Richard had a plethora of memorable cases and significant victories. In 1970, he traveled to Vietnam during the war, successfully defending a U.S. soldier accused of 1st degree murder. He also took a medical malpractice case to the New Jersey Supreme Court, resulting in a ruling that ultimately changed the law in NJ and then across the country regarding the issue of informed consent from patients. He was also a fierce defender of women’s reproductive rights, obtaining a first-of-its-kind injunction against protestors on behalf of a Planned Parenthood clinic. Richard was a zealous advocate for his clients, but he was also a consummate professional to the Court and his adversaries alike. He received the 2018 Abraham J. Zager Professionalism Award from the Monmouth Bar Association, celebrating his career-long commitment to the highest professional standards. Most importantly, Richard loved his family and friends. His greatest joy was sitting on his front porch holding court and imploring all those who visited to tour his grounds. There was never a bail he wasn’t willing to pay, an inner-city church he wasn’t willing to donate to, or a roast he wasn’t happy to give. He loved to “help” his wife cook, usually resulting in broken glass, burnt food, and stitches. When he wasn’t helping in the kitchen, Richard could usually be found weeding in the yard, which he approached in the same way a Buddhist monk approaches sand raking. It was his quiet time for peace, reflection, and back pain. Although not one to express it, Richard’s actions always exhibited an empathy and bottomless well of patience for everyone in his life. He was the person you’d call when you most needed help, and he never judged you for it. Richard managed to live a long and full life despite being written off many times. He loved hard, travelled far, and lived a life unbound by others’ expectations. In his final moments, he reflected on his philosophy of life as expressed in his favorite proverb: Things done by halves are worthless; it may be the other half that counts. Services will be held for vaccinated and masked guests on Thursday, September 9, 2021, at 11:00 a.m. at Bloomfield-Cooper Jewish Chapels, 2130 Hwy. 35, Ocean, NJ 07712, with a private burial to follow. The family will be sitting Shiva between 4:00-9:00 p.m. on Thursday, September 9, 2021, at 415 Runyan Avenue, Deal Park, NJ 07723. In lieu of flowers or food, Richard wished for everyone reading this to be kinder to each other and to make donations to the Boys & Girls Club of Monmouth County, Rising Treetops at Oakhurst, or Planned Parenthood of Northern, Central and Southern New Jersey.
See more See Less

In Memory Of Richard Ansell