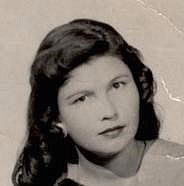 Gone are the days we shared with you, but in our hearts you will always be there! Magdalena “Nena” Castillo Carrasco, 88, passed away peacefully on Monday, July 25, 2022 in Odessa. In 1953 she married Alfredo Castillo. They were blessed with three sons Hilario, Hermilo and Alfredo. They were married for 69 years. Magdalena was born in El Vado De Piedra, Mexico on January 28, 1934 to Anjela Carrasco. She lived most her life in El Vado until she permanently moved to Odessa in 2014. Magdalena will always be remembered as a woman of faith and family. She devoted her life to being a wife and a mother. She was always so proud of her sons. Magdalena is survived by her husband of 69 years, Alfredo, her sons Hilario (Mellie) Hermilo (Rosa) and Alfredo Jr. (Eva) 9 grandchildren, 21 great grandchildren, 4 great great grandchildren. She was preceded in death by her grandson, Charlie Castillo. Visitation will be held Friday, July 29th from 12:00PM to 9:00PM at Odessa Funeral Home. Graveside Service will be held on Saturday, July 30th at 10:00AM A visitation for Magdalena will be held Friday, July 29, 2022 from 12:00 PM to 9:00 PM at Odessa Funeral Home, 1700 N Jackson Ave, Odessa, Texas. A graveside service will occur Saturday, July 30, 2022 at 10:00 AM at Ector County Cemetery, 300 S Dixie Blvd, Odessa, Texas. Serving as pallbearers are Adrian Castillo, Anthony Castillo, Alfredo Castillo III, Alfredo Castillo IV, Devin Solis and Kanon Castillo. Fond memories and expressions of sympathy may be shared at www.odessafuneralhome.com for the Castillo family.
See more See Less

In Memory Of Magdalena Carrasco Castillo