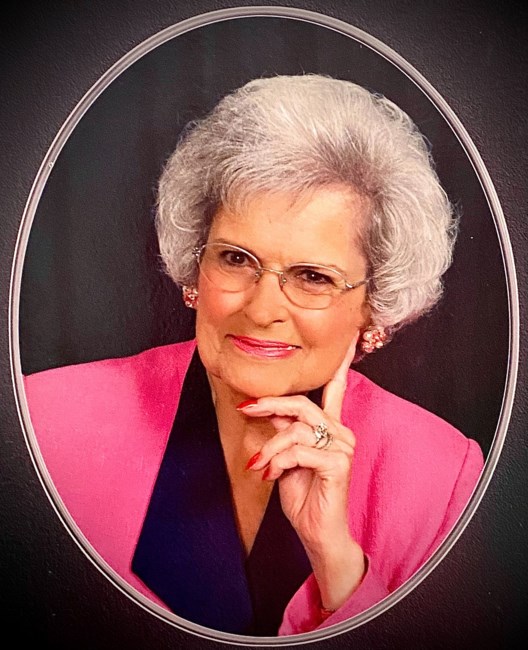 Thelda Clark Taylor died on Sunday, February 6, 2022. She was born in Winters, Texas on July 11, 1930 to W.F. “Dub” and Loreta Clark. She graduated from Winters High School, received a B.A. degree from Baylor University in Waco, Texas and then married her college sweetheart, Glen “Jug” Taylor on June 3, 1951 in San Angelo, Texas. The remaining years of her life were spent in Odessa with time shared at their vacation homes at Lake Brownwood and O.H. Ivie. Thelda had many memorable experiences during her life. At Baylor, she was a member of Pi Alpha Lambda social sorority, Rodeo Queen and Baylor representative to area rodeos. As a Spanish and Education major, she was inducted into the Spanish academic fraternity, Sigma Delta Pi. During College, Thelda broke, trained and rode her own horses for barrel races in the summer. In Odessa, Thelda was a lifetime member of Baylor Alumni Association and of Beta Sigma Phi. She was elected Valentine Queen and Girl of the Year and served as president of three chapters, and was chairperson of Odessa’s First Lady Tea for two years. Thelda was Royal High Lady of Alpha XI Conclave of Kappa Kappa Lota, teacher’s sorority. Odessa Downtown Lioness Club was another venue that she shared her talents and helped build Progressive Park by Odessa Regional. She held the office of treasurer for many years. Thelda worked for ECISD for 28 years, enjoying many good memories with her students at Dowling and Alamo. She received her master’s degree plus 30 hours in Administration from UTPB. She was a pioneer in educational technology, being one of the original master trainers in Texas for using TENET (educational internet) in schools and was appointed and served as Area II director in Texas Computer Education Association. She retired in 1996 as acting coordinator of Instructional Technology. Thelda and Glen also owned and operated the Baskin Robbins/KaleidoScoops Ice Cream Store for 20 years. Although her job provided great joy in her life, family and church came first. Watching sporting events that included her two sons and their friends furnished a bond that lasted her lifetime. Nobody can fathom the love and sacrifices that this angel provided to her boys – it was certainly a privileged blessing to be one of her sons. The love she received from her family would be an example for others to envy. Thelda prepared to serve her Lord and savior, Jesus Christ, by minoring in Bible at Baylor. She taught Sunday school classes as well as serving as director of an adult department and served on her church’s finance committee as well as others. Thelda was preceded in death by her husband of 57 years; son, Bucky; parents; and brother, Donus Clark. She is survived by her son, Byron III of Odessa; daughter-in-law, Laura, of Spring; grandson, Buckley Taylor, Jr of Porter; granddaughter, Estee Harcrow of Katy; and great grandchildren, Layne, Landon, Lexie, and Steven. Other survivors include nieces, Donna Love of Houston, Diane Turner of Smithville, Dub Clark of Seattle, WA, and cousin, Rhea Thompson of Abilene. The family will receive friends for visitation on Monday, February 21, 2022 from 5-9 PM at Frank W. Wilson Funeral Directors. Funeral services will be Tuesday, February 22, 2022 at 10 AM at First Baptist Church. Graveside services will be at 3 PM beside Thelda’s husband, parents, grandparents and great grandparents in the family plot in Glen Cove.
See more See Less

In Memory Of Thelda Clark Taylor