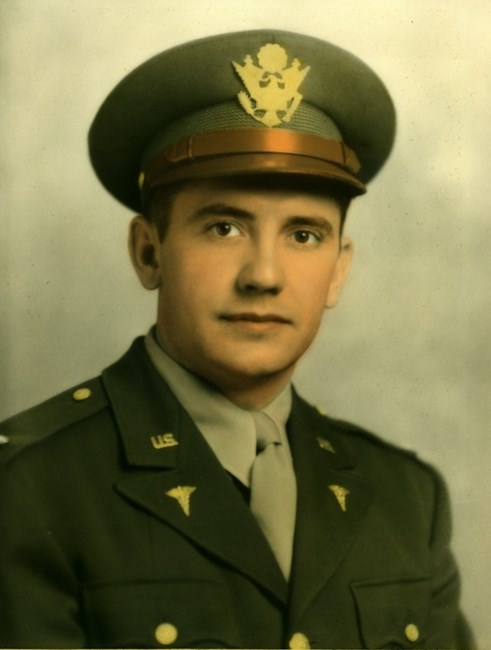 A.C.Lisle, Jr, M.D., died peacefully at home on September 23, 2013, surrounded by members of his loving family. He was a true gentleman, adoring husband, and caring father. He was a physician who tirelessly devoted himself to improving the quality of the lives of his patients. He treated all whom he encountered with respect. A.C. was born on February 3, 1919, in McLoud, Oklahoma, the eldest of three sons of Courtney and Lucille Lisle. A.C., or "Ace," knew at an early age that the medical profession was his calling. He entered the University of Oklahoma in 1936 and graduated from medical school there in 1943. As a 4th year medical student, he encountered a lovely patient, Madge Troup, during her hospitalization at University Hospital. They wed in Holdenville, Oklahoma in 1944. Three months later, he went overseas to serve in the Army Medical Corps during World War II. He was Chief of Surgery at the Southampton station hospital in England and worked in French field hospitals, arriving there 5 days after D-Day. He returned home in 1946 to continue his medical career as Oklahoma's first neurosurgical resident at University Hospital. In 1949, he joined the neurosurgical practice of Drs.Harry Wilkins and Jess Hermann, his residency mentors. In 1955, he formed the first medical corporation that would become the Oklahoma Neurological Surgery Clinic with Dr. Bob Rutledge. That practice would eventually evolve into the Neuroscience Institute at Mercy Health Center. Dr. Lisle's professional achievements included: Chief of Neurological Surgery at St. Anthony's & Mercy Hospitals; Diplomate of American Board of Neurosurgeons; Congress of Neurological Surgeons; Harvey Cushing Society; President of Oklahoma Medical Society. He was perhaps most proud of training more than 50 neurosurgeons as Clinical Professor of Neurological Surgery. He retired in 2001, ending a 58-year medical career that witnessed incredible changes in medical science and neurosurgical practice. Although much of his life was committed to his patients, A.C. greatly enjoyed hunting, fishing, and playing golf, particularly with his sons. A sly sense of humor lurked beneath his precise and courteous manner, though he would likely want the specifics kept from public eye. Madge and A.C. enjoyed 65 wonderful years of marriage. Together they traveled the world. They had many close friends, who often joined them in their travels. Madge preceded A.C. in death in 2009. He missed his beloved immensely every day since he lost her. A.C. is survived by his three sons and their spouses: Court, Jim (Pauline) and David (Cheryl); his 6 grandchildren and their spouses: Ben (Erin), Turner (Christine), Carolyn (Jon), Autumn (Deke - deceased), Elizabeth, and Kylie (Lucas); his 5 great grandchildren: Rheanna, Owen, Olivia, Anna, and Kate; his brother Kenneth Lisle; his brother-in-law Rudolph Troup; and others from the Lisle and Troup extended families. He was preceded in death by his younger brother, Howard.  The entire Lisle family wishes to express its heartfelt gratitude to Michael Elsworth and his staff for the outstanding and compassionate care and comfort that they provided Dad (a.k.a. Pop Pop to his grandchildren) in the final years of his life. Additionally, the family thanks Frontier Hospice and its staff for its assistance as his life neared completion.   In lieu of flowers, donations may be made to Oklahoma Brain Tumor Foundation, 730 W. Wilshir Boulevard, Suite 114, OKC, 73116, www.okbtf.org, or Frontier Hospice Foundation, 3817 NW Expressway, Suite 780, Oklahoma City, OK 73112-1489. A Memorial Service will be held at All Souls’ Episcopal Church, 6400 N. Pennsylvania on Friday, September 27.2013 at 3 PM.
See more See Less