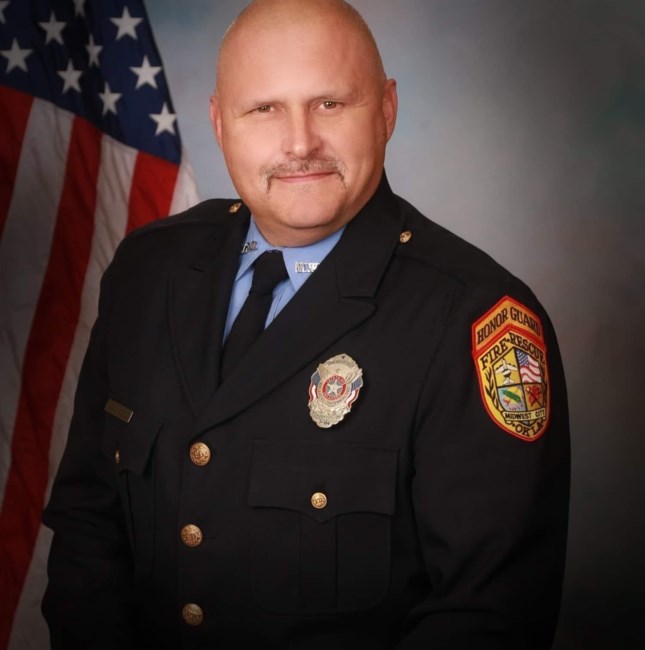 Darin was one of two children born to Dennis & Wanda Hodges. He started his life in Oxnard, California. The family came to Oklahoma in 1978. Darin is a Carl Albert Alumni of 1986. He has always taken pride in his Midwest City community. He joined the United States Air Force in 1990 as a firefighter. After he fulfilled his commitment, he returned home and was hired as a Midwest City firefighter. He was on the MWCFD for 24 years when he was diagnosed with stage 4 colon cancer. He had so much pride being a firefighter. Even after having to retire from the department, he continued to teach what he loved to do at OSU-OKC. He is preceded in death by his mother, Wanda. He is survived by his father, Dennis; brother, Christopher; sons, Jakkson and Zachary; step-daughter, Kelsey; daughters-in-law, Jessica and Crystal' six grandchildren, Robert, Tyler, Harley, Giuliana, Rhett, and Paisley. Not forgetting aunts, uncles, many cousins, and countless friends who became family through the years. Darin was known for his strength, wit, stubbornness and infectious smile. His laugh could fill a room. He was protective of those he loved and never let blood define family. While he may be gone in body, his spirit and love will continue on through all of those who knew him. His family and friends meant the world to him. To his family, he's a hero and now pain-free with his place next to his momma and the Lord, who he profoundly praised. While among us, he touched many hearts and impacted so many lives. For the person he was, the love and kindness he shared with each of us, he will forever live in our memories. The viewing will be Saturday, January 21, 2023 from 1:00 p.m. to 5:00 p.m. at Bill Eisenhour NE Funeral Home, 8805 NE 23rd Street, Oklahoma City, OK 73141. The Memorial Service will be Saturday, January 28, 2023 at 2:00 p.m. at Life Church MWC, 6809 E. Reno Avenue, Midwest City, OK 73110. With graveside services to follow at Arlington Cemetery, 3400 N. Midwest Blvd., Oklahoma City, OK 73141.
See more See Less

In Memory Of Darin James Hodges