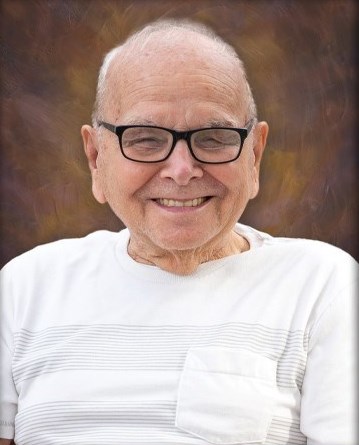 Frank Joseph Brtko, a resident of Edmond, passed away at the age of 88, on May 10, 2022. Frank was born in Likavka, Czechoslovakia on December 12, 1933. Frank was one of three children born to Frank Brtko Sr. and Veronica Pseno Brtko. In 1936, Frank’s parents brought the family to the United States and they made their home in Chicago. Frank graduated from Chicago Vocational School and went on to join the army. Frank served in the United States Army from 1955-57 and was honorably discharged with a rank of Specialist 3rd Class. Frank married Arlene Mastik in 1957 and they were married for 57 wonderful years before her death in 2014. Frank and Arlene started a family while living in the Chicago area. He worked for IBM for a few years before beginning his long career with Simplex. His work took Frank and his young family to Colorado, where he lived for several years before moving to Oklahoma in 1972. Frank retired from Simplex after 35 years and retired in 2000. Frank was a member of the Pyramid Club of Oklahoma City and Simplex 100% Club which gave him numerous trips and vacations. Frank was an avid Cubs fan and anytime they were playing, you could bet he had the ball game on. He loved to travel with his wife and family. You could also find him swimming in their pool during the summers. He loved listening to polka and country music. Frank had a great sense of humor and enjoyed reading his Birthday Cards. He liked telling jokes and would try to get to the punchline without laughing. He especially enjoyed being at family gatherings. Later in life he enjoyed jigsaw puzzles. Frank loved and was always proud of his wife and family, and also the Chicago Cubs. He was a true example of love through patience, kindness, and devotion. Frank is preceded in death by his parents, his wife Arlene and sister Mildred Sheron and her husband Emil. He leaves to cherish his memory his children Michelle Marie Heinzig and husband Don Heinzig of Oklahoma City, OK, Cynthia Ann Brtko of Edmond, OK, Kimberly Lynn Wood and husband Paul Wood of Edmond, OK, and Colleen Bernice Jackson and husband Tim Jackson of Oklahoma City, OK; sister Zita Tanski of Whiting, IN; 6 grandchildren Chris Jeffreys and wife Belinda, Ashley Tocco, Nikki Lamb and husband Tate, Allyson Jackson, Wes Jackson, and Kara Dry, five great grandchildren, 2 nieces and 5 nephews. A celebration of Frank’s life with Military Honors will be 10:00 a.m., Monday, May 16, 2022 at Chapel Hill Funeral Home with interment following in Resurrection Memorial Cemetery. Fond memories and expressions of sympathy may be shared at www.chapelhill-okc.com for the Brtko family.
See more See Less

In Memory Of Frank Joseph Brtko