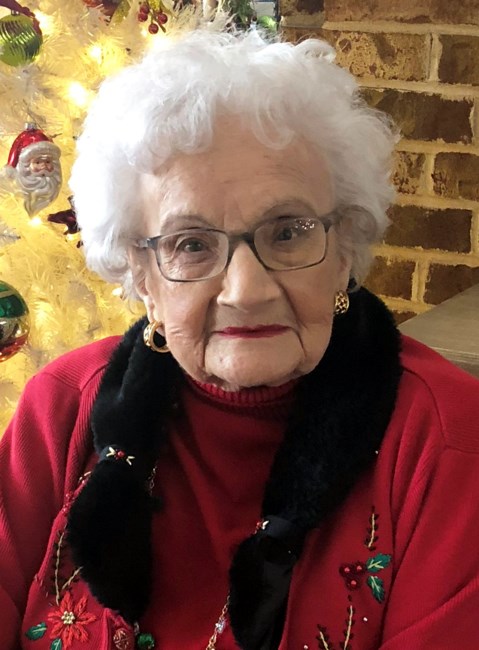 Jeanette Estelle (Jones) Heldenbrand passed from this life and on to the next May 7, 2022, at the age of 103. She was born June 23, 1918, in Wichita, Kansas, to Herbert C. and Myrtle Jones. The family moved to a dairy farm near El Dorado, Kansas, where they spent some years before moving back to Wichita. She graduated from Wichita North High School in 1936, and was friends with Grace Heldenbrand whose brother, Victor Vernon Heldenbrand, would later become her husband and love of her life for 61 years until his passing in 2007. They married on October 12, 1946, in Pasadena, California, and started their family in November, 1947, with the arrival of a daughter, Victoria Sue. After moving to Oklahoma City, they welcomed a son, Christopher Alan, in 1952. Prior to marriage, and waiting for Victor to return from service in World War II, Jeanette proudly worked for the Pasadena, California, police force as a fingerprint technician and assistant to the chief. After marriage, she was primarily a stay-at-home mom, but also an accomplished seamstress, bridge player, and good friend to many, always up for a shopping trip downtown or, later, to a mall. She was very involved in activities at Wesley United Methodist Church, where she was a member for more than 70 years. She remained a member even when declining health precluded regular attendance. She was preceded in death by her husband Victor, her parents, brothers Herbert H. and Marsh Jones, sister Helen Jones Thompson, and virtually all her lifelong friends. She is survived by her daughter, Vicki Williams and husband Eric Peterson, grandchildren Tiffany McAneny (Lenny) and Christopher Williams (Sally), and 5 great-grandchildren. Also by her son, Chris, and grandchildren Ian Hedrick (Jessica), Mia Blake (Michael), Sterling Heldenbrand (Carrie), 8 greatgrandchildren and numerous step-great-grandchildren. She also leaves cherished nieces and nephews on both sides of the family. Service are Friday, May 20, 2022, 1:00 PM at Wesley United Methodist Church, NW 25th Street and Classen Boulevard, Oklahoma City. Interment will follow at Chapel Hill Memorial Gardens, where she will lie in eternal rest next to her beloved Victor
See more See Less

In Memory Of Jeanette E. Heldenbrand