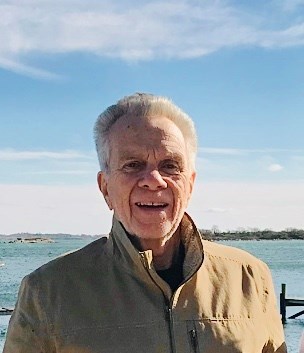 It is with great sadness that the family of Gerald (Jerry) L. Nolan announces his passing on Thursday, May 7, 2020 at the age of 82. He was a longtime resident of Old Lyme, CT. Jerry was the seventh child born to the late William Henry and Harriet (Slaney) Nolan in Hartford, CT. His parents and siblings held a very special place in his heart. William, Robert, Thomas, Lois, Anne, and Helen (and her husband, John) have all predeceased their youngest brother. After graduating from Hartford Public High School, he served honorably in the United States Coast Guard. Jerry received a Bachelor of Science degree from Central Connecticut State University, where he was actively involved as chancellor of his fraternity, Lambda Phi Alpha and also served as president of the Interfraternity Council. He also earned multiple graduate degrees from Fairfield University. A four decade long career in education began in New Britain and brought him to Salisbury, Groton, Ledyard, North Haven, and even Arizona. He began in the classroom and throughout his years, rose to the position of Superintendent of Schools. He honestly loved each opportunity he was provided. A favorite memory for him was the dedication of the library at Clintonville School in North Haven. Jerry will be truly missed by his wife, Ellen, with whom he shared 55 years of love, laughter, and friendship. He was cherished by his children; daughter Leanne and her husband, Edward Kerrigan of Old Lyme, daughter Suzanne Nolan of Waterford, and son Gerald Patrick Nolan of Deerfield Beach, Florida. He was a loving grandfather to his three grandchildren, Timothy Kerrigan of New York City, New York, Aidan Kerrigan of Old Lyme, and Chelsea Nolan of Old Lyme. Friends were a very important part of Jerry’s life. Friends became family and were by his side as he navigated the most challenging part of his life with grace. His sense of humor and loyalty to family and friends was always evident. A life-long sports enthusiast, Jerry never tired of sporting events, whether he was in the game, coaching his children, or watching his children and grandchildren play. He was instrumental in forming the New Britain Mar-Parks Men’s Fastpitch Softball team and managed the Fall River Indians of MA, Interstate Batterymen of Worcester, MA and the Raybestos Cardinals of Stratford. Raybestos won the National Championship in 1976 and Jerry realized one of his childhood dreams. He was inducted into the Connecticut Softball Hall of Fame in 1988. The family wishes to thank the compassionate care team at L&M Hospital and Madison House, especially those who went out of their way to provide love and support to Jerry and to us during the last two months. Nidia Montalvo is an angel and we will be forever grateful to her. A funeral for Jerry will take place at a later date when family and friends can gather to celebrate his life. In lieu of flowers, donations may be made to Project Paws, The Tim Buckley Project www.timbuckleyproject.org (P.O. Box 266 in Old Lyme, CT 06371) or the Alzheimer’s Foundation. Please visit www.fultontherouxoldlyme.com for tributes and updated service information.
See more See Less

In Memory Of Gerald L. Nolan