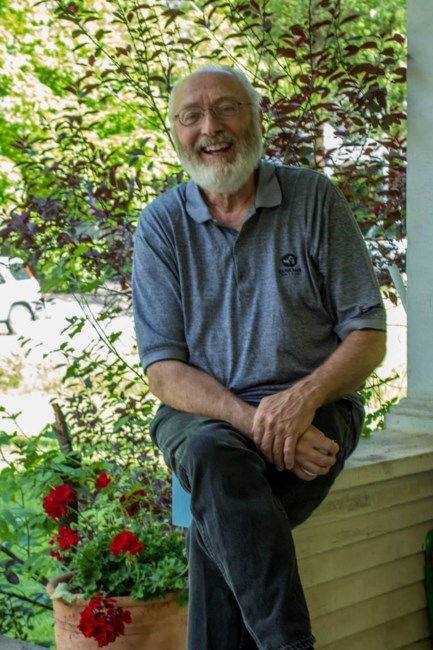 Bernard Herman Bruning was born on February 2nd, 1944 to Ralph and Frances Bruning. Bernie was the fourth of seven children; Elizabeth Harvey, Gerald, Clem, Frederick, Janet, & Donald. He grew up on a small farm between Bennington and Elkhorn. He attended grade school in a small one-roomed school at Sunnyside Country school, just across the road from his childhood home. Sometimes people would call Bernie 'different,' because growing up he loved to read a lot. Though he had asthma; he loved to still trap, 4H and farming alongside his brothers. However he had a deep passion for reading and music. Often telling the story of when he took apart a piano, and suddenly knew how to play by ear. His children would often talk of falling asleep to his music, and in awe. He graduated from high school at St. John's Seminary. Participating in music, drama club, and track. Frequently he told us all that he had an 'athlete heart,' as did his nurses. Bernard continued onto seminary studies for Priesthood at Conception Abbey in Maryville, Missouri. After much prayer, consideration, and with him being a single man; he did not feel equipped to the duty of counseling parents, couples - married or otherwise - and decided to leave this endeavor. Being just 15 hours away from his Priesthood, it was a big decision in his life. He left Missouri and came back to his parents farm to live for some time. Farming was another passion of his, alongside gardening and spent many days in his garden. During this period he returned to his home church of St. Patricks. He attended bible studies regularly as well as helped with directing the musical choir. The church thought highly of Bernie and of his musical talent, even sending him on a trip to San Francisco for it. Bernie thought highly of the Lord, and wanted to share him with the world. Within his early career, Bernie worked in Marketing at Majors Incorporated, following that he did some work in farming. While attending studies and choir, he met his first wife, Deborah Gail Venteicher. They’d often go out for pizza and bowling after their church commitments. They later married on August 8th, 1981. With Debbie having a love and gift for children; together they fostered many. In 1987 they officially began their family journey; eventually becoming a household of 5 adopted and 2 biological children. Bernard was preceded in death by Deborah, who passed in 1998 at a young age from liver cancer. After her passing; he continued on raising his children; David, Cathryn, Michelle, Michael, Joshua, Carissa and Lauren; in strong faith and love and a high respect for God. He also helped raise many other children as his own; Jillian Lukis, and Kim Lukis, and Pipsqueak. He emulated the love of God throughout his entire journey in life. The most loving and kind man, ready to always do whatever he possibly could for others. Known as 'Uncle Bernsky - The Legend.' He did end up leaving the Catholic church in the late 70s and explored many other types of religions within the Christian Faith, eventually aligning with the beliefs within The Church of God Sabbath Day and B’nai El Chai. Bernie remarried on 12/9/2006 to Shirley Ann Schroeder. The two were married for 15 years. He gained three stepsons, Timothy, Kevin, & Brian; and nine more grandchildren who he loved dearly throughout the years. Frequently speaking of Tim and his gardening skills. Bernie was diagnosed with stage 4 glioblastoma in January 2022, and spent the remainder of his days fighting back, but enjoying every moment; cared for by his dear sister Janet Bruning and children. Loved, humble, and happy with his grandchildren. Bernie passed away on 08/03/2022 around 6:45am with a smile. Bernie was loved and survived by all six of his siblings, children, & 26 grandchildren; Matthew, Joshua L, Braelynn, Trenton, Lianna, Xaria, Joshua D, Jordan, Chavez, Meia, Vivyan, Jason S. Jason R, Mariah, Jaiden, Isaac, Aiyanna, Trinity, Sophia, Taylor, Sierra, Heather, Caden, Micah, Jonathan, Julia and counting.. Please join us for a memorial in celebration of his life that will be held on 8/8/2022 at 10am; Westlawn 5701 Center St Omaha, NE 68106 A burial will follow. Please join us in celebration of life for a lunch in after; Peace Church Of The Brethren 2605 Avenue E Council Bluffs, IA 51501 Fond memories and expressions of sympathy may be shared at www.westlawnhillcrest.com for the Bruning family.
See more See Less

In Memory Of Bernard Herman Bruning