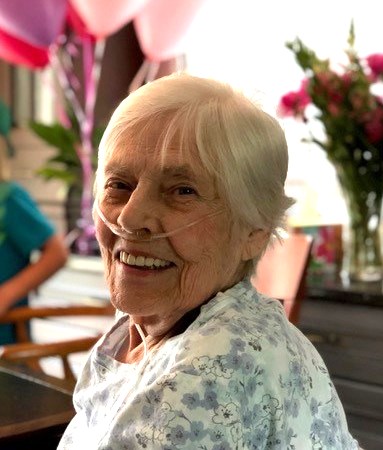 Gwyneth Joan Wax Hollibaugh, 86, passed away peacefully May 7, 2022, at Prairie Gate Care Center in Council Bluffs, Iowa. Joan was born June 24,1935 to John and Mary (Gwynn) Kearns of Rushville, Nebraska. She was the oldest of seven children. Joan attended country school until she moved to town and lived with her grandparents to attend school in Rushville. She was married to Larry Wax on May 20, 1954. To this union six children were born. Joan and Larry lived in various places until 1963, when they moved to Macedonia, Iowa, where Larry became the elementary principal at Carson-Macedonia Schools. Besides raising their six children, they took in Louise Crisler Peterson so she could finish out her senior year at C-M when her family moved. Larry and Joan also took in two of Larry’s nephews when their parents were unable to care for them. The family lived in Macedonia until the fall of 1976, when they moved to Wheatland, Wyoming where Larry took another elementary principal job. In January 1983, Larry, a former football coach, passed away on Super Bowl Sunday. Several years later Joan met and married Odie Warner. After Odie passed away Joan remained living in Wheatland until her retirement, and she asked Grandpa John to live with her and cared for him in his aging years. He instilled in her a love of baseball, and she became an avid Colorado Rockies fan. In Joan’s lifetime she had various jobs, but the one job she loved the most was being owner and operator of a fabric store in Wheatland. She loved to sew when she had the time. Joan met DeWayne Hollibaugh and married him in November 2001. They made their home in Chadron, Nebraska. While living in Chadron Joan fell and broke her hip, which led to many life-changing health issues. Her family moved her to Denver in 2018 to live with her daughters Mary and Wendy. In June 2021, her children moved her to the Care Center at Prairie Gate in Council Bluffs, Iowa. She lived there until the time of her death. Joan is preceded in death by her grandparents and parents, husbands Larry and Odie, brothers-in-law Lowell Wax, George Kehoe, Russ Carlson, Dick Ziegler, her special Aunt Dorothy Kearns, and nephews Rick and Lavern Wax, and Brian Haddix. She is survived by her husband DeWayne Hollibaugh of Crawford, Nebraska, her children Gary and Linda Wax of Macedonia, Iowa, John and Mary Wax of Emerson, Iowa, Ed and Linda Wax of Boulder, Colorado, Wendy and Fred Boutin of Denver, Colorado, Mary and Eric Lewis of Denver, Colorado, Angie and Dave Parker of Canyon, Texas. She is also survived by 12 grandchildren and 15 great grandchildren. Joan is survived by DeWayne’s children: Mike and Tammy Hollibaugh of Chadron, Nebraska, Greg and Becky Hollibaugh of Rapid City, South Dakota, Connie and Mark Kolling of Chadron, Nebraska, Patty Hollibaugh of Chadron, Nebraska, Lori and Keith Oetkin of Crawford, Nebraska, along with numerous grandchildren and great grandchildren. She is also survived by her siblings Doris Carlson of Scotia, New York, Jim (Lois) Kearns of Salt Lake City, Utah, Tom (Deb) Kearns of Rushville, Nebraska, Carol Kearns of Oceanside, Oregon, Ruth Ziegler of Friend, Nebraska, Corrine (Randy) Emery of Salt Lake City, Utah. Joan’s sister-in-law, Mary Lou Haddix resides in Chadron, Nebraska. She is also survived by many other friends and relatives, among them are very special friends Dorothy Braden and Carolyn Sandon. Joan loved her family and was so proud of her children and grandchildren. She was a faithful Catholic and attended numerous rosaries at Prairie Gate. Westlawn-Hillcrest Funeral Home in Omaha is caring for Joan and her family.
See more See Less