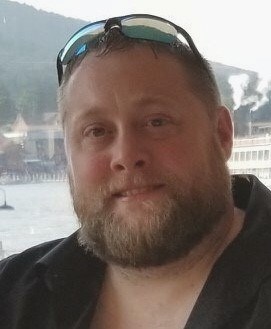 John D. Heller, 38, of Oneonta gave his life saving the love of his life and fiancé, Amber Roe and his four precious nephews, Saturday, December 29, 2018. He was born September 22, 1980 in Oneonta, the son of John R. and Gayle (Eggler) Heller. John graduated from Oneonta High School the class of 2000. He attended Herkimer Community College. John was a Life Skills Supervisor at Oneonta Job Corp Academy. He was well loved and respected by both his coworkers and his students. Together with his dad, John enjoyed model trains. He loved to decorate for all the holidays, watching football especially University of Michigan. Traveling and camping with Amber were also greatly enjoyed. John had a huge heart for everyone and especially, Amber and his four nephews. He will be remembered for his keen sense of humor. He was a former Oneonta Fire fighter. John is survived by his fiancé and soulmate, Amber Roe, Oneonta; his parents, John and Gayle Heller, Oneonta; brother and sister-in-law, Michael and Erika Heller, Oneonta; four nephews, Donovan, Maddox, Macall and Rawley Heller; maternal grandmother, Phyllis Eggler, Oneonta; aunts and uncles, George A. Eggler and Evando Macario, Sharon and Clifford Costello, Gary Heller and Christine Eldred and Larry and Sally Heller; mother-in-law, Cyndy Doroski, East Meredith; as well as several cousins. He was predeceased by his paternal grandparents, Abbie Heller and John O. Heller; maternal grandfather, George L. Eggler; father-in-law, Herb Roe. Calling hours will be held on Thursday, January 3, 2019 in the Bookhout Funeral Home, 357 Main Street, Oneonta from 5:00 to 8:00 PM. Funeral services will be held on Friday, January 4, 2019 at 1:00 PM at the Foothills Performing Arts Center, 24 Market Street, Oneonta with Rev. Judith A. Thistle officiating. There will be a celebration of life at the East Meredith Fire Department, immediately following the funeral service. Burial will be at a later date in the Charlotte Valley Cemetery. Memorial donations may be made to either the Oneonta Fire Department Rescue Fund, 81 Main Street, Oneonta, New York 13820 or the East Meredith Rural Fire District, P.O. Box 65, East Meredith, New York 13757, Attn. Chief David Briggs. John’s family would like to thank the entire community for their outpouring love and support shown to them during this difficult time.
See more See Less

In Memory Of John D. Heller