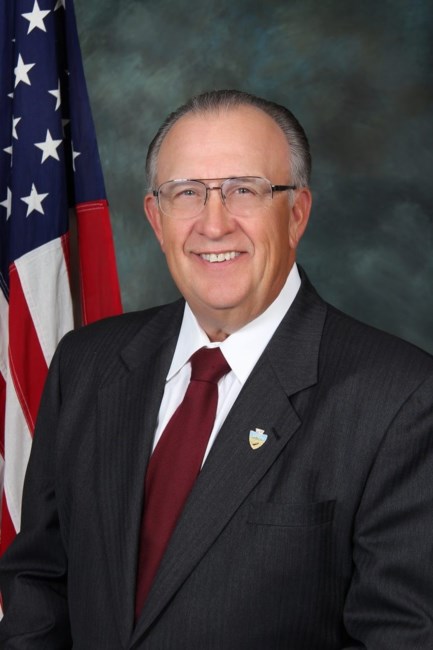 Senator Robert D. “RC Bob” Dutton (Ret.) age 71, passed away at home surrounded by family on July 23, 2022. Bob was born in 1950 in Lincoln, Nebraska. He was the first of 4 children born to Ted Dutton and Dorothy Gould. He is survived by his devoted wife, Andrea Guillen Dutton, of 40 years, and his loving daughter, Kara Ann Dutton. Bob moved to California in 1969. He proudly served in the Army Reserve, was a member of the California Air National Guard, and was honorably discharged in 1974. He served for two terms as Student Body President at Los Angeles Valley College where he obtained his Associate Degree, then received his Real Estate Brokers License from the State of California immediately thereafter 50 years ago. He became a small business owner when he established a property management and investment firm with his father, Ted Dutton, for 30 years. Bob enjoyed movies and butter popcorn, watching the Nebraska Cornhuskers football games, skiing, dancing, entertaining, golfing, hunting upland game, skeet & trap shooting, and was a great cook. He had a passion for dogs. With his Labrador retrievers, he achieved the AKC National Master Amateur Handler status, but most of all, he enjoyed being at home with his family. Bob was involved in community service and local charities throughout his life. He served as Chairman and Board Member for numerous community and civic organizations, and was a member of several professional organizations. As a coach and manager for his daughter’s fast-pitch ACE s, American past-time travel, and the Cucamonga Dodgers travel softball teams. He mentored dozens of players who later received scholarships to attend colleges. One of his mentees once wrote to him “Thanks for always being there, I think of you as an extra dad with all the extra love and support you give me and the others”. Bob’s elected public service spanned over 20 years, where he was elected to serve on the Rancho Cucamonga City Council for 4 1/2 years before being elected to the State Assembly. He served 8 years in the California State Senate. As Senator, Bob served on several committees and was the Leader of the Senate Republican Caucus, Vice-Chair of Rules Committee, Vice-Chair of the Budget and Fiscal Review Committee, and a member of other committees including Appropriations. Bob served as Assessor-Recorder for over 2 million people in San Bernardino County, California, the largest geographical county in the United States. He initiated and shared the San Bernardino County history segments on social media every Thursday, which was well received and enjoyed by all constituents and beyond. In addition to Andrea and Kara (Cansu), Bob is survived by his parents, Ted and Jo Dutton (TX); siblings, Bill (Judy) Dutton (NE), Jeanne (Steve) Matthes (NE), Tom (Jan) Nickles (NE); step-brothers Brooks (Sharon) Aldrich (TX), Brendan (Mary) Aldrich (IN), Mark (Amy) Aldrich (CA); sisters-in-law Antoinette (Randy) Gonzales (CA), Annette (Danny) Bauman (CA), and Annamarie (Guillen) Huser (AK); brother-in-law John Guillen (CA); numerous nieces, nephews, great-nieces, and great-nephews. He is preceded in death by his mother and step-father, Dorothy (Gould) and Calvin Nickles (NE); brother Jerry Dutton (SD); step-brother Dale Nickles (NE); step-sister Linda Bright (NE); mother-in-law Maryann Guillen (CA); father-in-law Cheyo Guillen (CA); and brother-in-law Pat Guillen (CA). His family is grateful for the outpour of support from family, friends, colleagues, Team ARC, and the community for their phone calls, cards, flowers, visits, comments, and prayers. As Senator Dutton would often say in closing, “Thank you for the confidence that you have placed in me during my time serving the San Bernardino County and God bless you." Donations may be sent in his memory to the San Bernardino Children’s Fund, Our Lady of Guadalupe Church in Chino, American Cancer Society, or the San Bernardino County Sheriff’s Council. A public Rosary and Funeral Mass will take place on Friday, August 19, 2022 beginning at 10:00 am at St. Peter and St. Paul Catholic Church in Rancho Cucamonga, followed by the public Celebration of Life at the DoubleTree by Hilton Ontario Airport. PRESS RELEASE BY SAN BERNARDINO COUNTY https://arc.sbcounty.gov/with-a-heavy-heart-mourning MEMORIAL VIDEO BY SAN BERNARDINO COUNTY https://www.youtube.com/watch?v=PUCuLFUMZpY
See more See Less