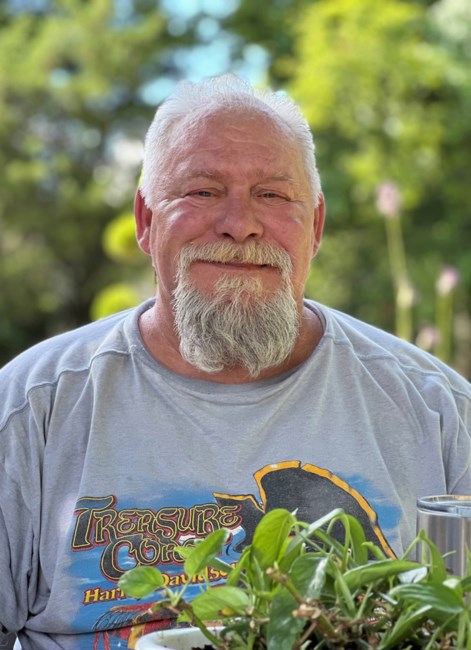 Douglas Howard Caudell Sr., 64, passed away at his home in Mansfield, Ohio, on Tuesday, August 2, 2022, after a long-term illness. Born December 1, 1957, in Mansfield, Ohio, to Henry and Kathryn (Binion) Caudell Sr., he was a lifelong resident. Retiring after many years from Kokosing Construction, he loved riding his Harley Davidson motorcycles, fishing, playing with his grandkids and fur babies, Angel, Gabby and Bonz. He loved traveling to Tennessee or just sitting on his front porch watching his birds. Doug often would share a good joke or story that always made the listener laugh. Blue Grass and country gospel music were at the top of his list. He truly loved the Lord and was always ready to help anyone in need. Doug is survived by his longtime companion and wife, Penny Hunt Caudell; two daughters, Angie (David) Medved of Lincoln Park, MI, Jennifer Caudell of Columbus, OH; two sons, Doug Caudell Jr. of Mansfield and Chad (Justin) Caudell of Lewisburg, TN; seven grandchildren, Taylor, Jacob, Kaden, Kaylee, Kole, Kashton and Abby; three sisters, Karen Duncan and Kathryn (George) Zajack, both of Mansfield and Kristina (Steve) Guyton of Wilmington, OH; a brother, Sidney Caudell; half brother, Henry (Lynn) Caudell Jr. of Shelby, OH; half sister, Pamela Caudell of Mansfield; step son, Brian Hunt; mother-in-law, Elsie Hunt; brother-in-law, Sarge (Leona) See; very loyal and longtime friends, Davey Robson and Jack See; and several nieces, nephews and cousins. Doug was preceded in death by his parents; infant daughter, Misty Caudell; brother, William Caudell; half brother, David Caudell; and step mother, Carolyn Caudell. Doug will be greatly missed by family, friends and anyone who was able to share a day with him. Now Doug is enjoying and sharing eternity with his Lord. The family will receive friends from 3:00-5:00 p.m. Sunday, August 7, 2022, at the Ontario Home of Wappner Funeral Directors, 100 S. Lexington-Springmill Road. The funeral service will be held in the funeral home on Monday at 10:30 a.m. with Pastor Hank Webb officiating. He will be laid to rest in Mansfield Memorial Park. In lieu of flowers, memorial contributions may be made to the Humane Society of Richland County, St. Jude Children’s Research Hospital or the American Diabetes Association.
See more See Less

In Memory Of Douglas Howard Caudell