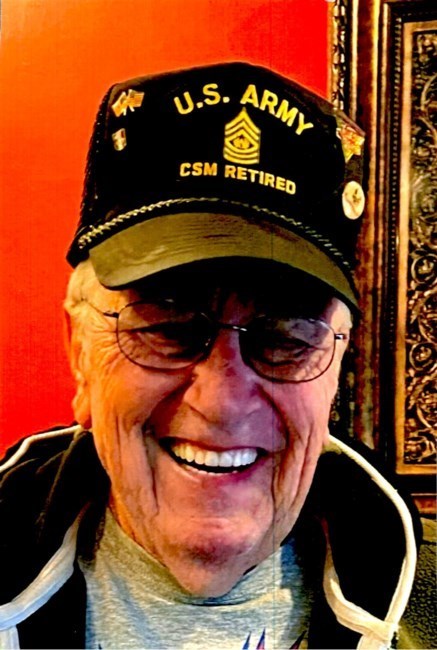 Command Sergeant Major (Retired) Kenneth Eubanks, 82, of Conway, AR went to be with the Lord on January 1, 2023, at Baptist Health Medical Center of Little Rock, AR. Born on June 17, 1940, in Beech Grove, AR to the late Frank and Pearlie Eubanks. In addition to his parents, he was preceded in death by his first wife, Lucia Eubanks; brother, Leon Eubanks; and sisters, Vera Driver, Neva Dlabaj, and Elizabeth Dennis. Kenneth is survived by his wife, Patsy Eubanks; sister, Louise Driver; son, Michael and wife Melissa; daughter Barbara and husband Danny, daughter Silvia and husband Mike, stepson Tommy and wife Kim. Additionally survived by four grandchildren, Nicole and husband Caleb, Kenneth, Ty, and Emilie; two step grandchildren, Megan and husband Bryan, and Jennifer; three great grandsons Braxton, Parker, and Wyatt Joshua; and several nieces and nephews. Kenneth was a graduate of Newport High School. He entered the Army in 1960, serving 30 years, during this time he met his late wife of 50 years. He served at Vietnam, Thailand, Germany, Italy, and France. His military career spanned during the majority of the Cold War, joining prior to the Berlin Wall being built, and retiring after it came down. After retirement from the Army, Kenneth worked for the United States Post Office for several years until enjoying full retirement. Kenneth reconnected with high school sweetheart, and married his wife of 8 years, Patsy Eubanks on January 5, 2015. They enjoyed spending time with family and friends. He was a member of the Central Arkansas Corvette Club; he and Patsy frequently traveled with friends to show cars. He was the proud owner of a 1930 A Model Ford, 1957 Chevy Belair, and 2015 Corvette Stingray Convertible. When he wasn’t in the garage cleaning up cars, you could find him outside. Kenneth had a passion for gardening, each year growing a large vegetable garden, in addition to his flowers and house plants. Death leaves a heartache no one can heal. Love leaves a memory no one can steal. Your life was a blessing, your memory a treasure. You are loved beyond words. The family wishes to express gratitude to Dr. Sue Tsuda and staff of Conway Hematology-Oncology, in Conway, AR. Additional support provided by the caring and supportive staff at Conway Regional Medical Center of Conway, AR and Baptist Health Medical Center of Little Rock, AR. In lieu of flowers, Kenneth’s wishes were for memorial contributions to be made to the Tunnel to Towers Foundation or Conway Hematology-Oncology. VIsitation will begin at 9:00 am Saturday, February 4, 2023 at the Griffin Leggett Conway Funeral home, with services beginning at 10:00am. A committal service with Military Honors will be at 1:00 p.m. Saturday, March 18, 2023 at Deltona Memorial Gardens; 1295 Saxon Blvd; Orange City, Florida with Clergy Mike Caroline officiating. Also, a reception will be held in the funeral home after the service.
See more See Less

In Memory Of Kenneth M. Eubanks