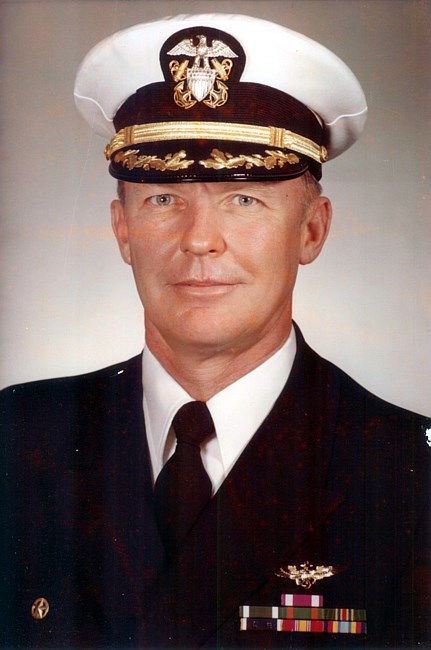 Captain Richard Edgar Allsopp (Dick), 84, passed away November 29, 2018. He was born August 28, 1934 in New York, NY and is a native of Huntington, Long Island. He is survived by Rosemary Allsopp, his loving wife of 58 years; Elizabeth McDonough (Beth), daughter; Richard Edgar Allsopp, Jr. (Rick), son and his wife, Sharon; Robert (Rob) and Eric Allsopp, grandsons; Corey and Matthew McDonough, grandsons; Alice Widmier and her husband, Mike, sister and brother-in-law; and Judith Lazaar and her husband Bob, sister and brother-in-law. He was preceded in death by his parents, Edgar and Helen Allsopp; and his brother, James Allsopp (Jim). Highlights of his long and honorable Navy career include serving as a pilot; Commander of the V.S. 28 squadron in Cecil Field, FL; Navigator aboard the aircraft carrier, USS John F. Kennedy; Captain of the USS Canisteo; and Chief of Staff for Group 12 in Mayport, FL and the Southern Command in Panama, Central America. After retiring from the Navy in 1988, Dick continued to work tirelessly for the rest of his life as a volunteer for U.S. Sailing where he infused many young people with a love of sailing, mentored countless sailing instructors, and made significant contributions to sail training and race officiating. Dubbed the “godfather” of U.S. powerboating, Dick was co-author of the book,Start Powerboating Right!, and worked to promote U.S. powerboat handling standards. A lifelong sailor, Dick was a devoted member of the Rudder Club in Jacksonville, FL since 1973. A visitation will be Wednesday, December 5, 2018, 6-8 p.m.; the funeral service will be Thursday December 6, 2018, 11:00 a.m., both at Hardage-Giddens Rivermead Funeral Home, 127 Blanding Blvd Orange Park, FL 32073. A burial with military honors will follow at Jacksonville National Cemetery at 2:30 p.m., 4083 Lannie Rd Jacksonville, FL 32218 Arrangements are under the care of HARDAGE-GIDDENS RIVERMEAD FUNERAL HOME. We invite you to leave words of comfort at www.hardage-giddensrivermead.com Donations in his memory may be made to Dick’s alma mater, Jacksonville University for the Sailing Team: https://www.ju.edu/give/sailing/.
See more See Less

In Memory Of Richard Edgar Allsopp