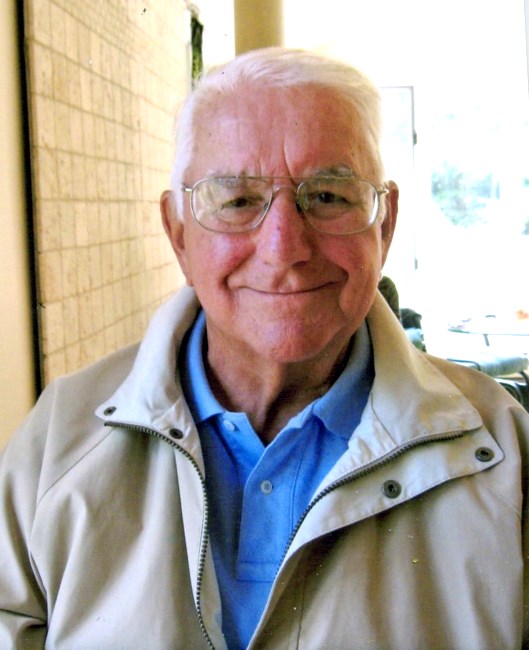 Edward Joseph Wood of N. Eastham, MA, formerly of Wethersfield, CT, passed away surrounded by his loving family on June 9th. He was the husband of Joyce Carol (Huber) Wood for 56 years. Born in Hartford, CT, April 26, 1926, Ed spent his youth in the Frog Hollow section of Hartford. It was a melting pot of European families, and he learned there not to judge a person by his color, ethnic background or religion. He lived by this all his life. Ed graduated from Hartford Public High School in 1944. He then served in the Navy’s Pacific Theatre on an L.S.T. Landing ship carrying torpedoes and later as an M.P. in the Philippines. On returning after the war, he entered Boston University on the G.I. bill where he received his letter in swimming and graduated cum laude with a BS in Political Science, and was elected to Phi Beta Kappa. He then went on to earn an MS in Education from Harvard and an MA in History from Trinity College, where his thesis on the Marshall Mission is considered the definitive work today. Passing up many opportunities to teach at the college level or work for the government at the FBI, he chose to go back to his roots and teach in the inner city at Hartford Public High School. He taught history, government, and economics for 38 years. In addition, he served as Faculty Athletic Manager for 17 years, was Director of the College Board Program, an Adult Education teacher, and a CT swimming and diving official. A lifetime learner, Ed was a voracious reader, and loved opera since he was smitten at age ten listening to Carmen on the radio. A long distance simmer, he swam on Cape Cod Bay and the Atlantic. Ed also enjoyed gardening and all sports. Ed loved talking about his many adventures, especially being stranded on Zig Zag Pass in the Philippines and being shot at by the Japanese. Ed was a charter member of the Pine Acres Swim and Tennis Club in Wethersfield where he served on the Board. Above all, his happiest times were the two months he spent with his family hiking the trails on land and in the mountains of Acadia National Park in Maine. Besides his wife, Joyce, who he met at the Catholic Graduates Club in Hartford and proposed six weeks later, he leaves a son John of N. Eastham, MA and a daughter Carolyn Troy and her husband Ken of Norwalk, CT. Ed was predeceased by his parents Caroline and Walter, a brother Frank, a sister Genia Wittman of VA and her husband Frank, an infant daughter Mary, and son James. Many thanks to the wonderful staff at the Terraces of Orleans who gave Ed such loving care these past few months. A Funeral Mass with military honors will be celebrated at 11:00 AM on Saturday, June 17th at St. Joan of Arc Church, 61 Canal Rd, Orleans, MA 02653. In lieu of flowers, donations in Ed’s name may be sent to St. Jude Children’s Hospital, 501 St. Jude Place, Memphis, TN 38105, or to the Alzheimer’s Association National Capital Area Chapter, 8180 Greensboro Drive, Suite 400, McLean, VA 22102. Messages of condolence can be sent to the Wood Family, PO Box 1814, N. Eastham, MA 02651. Or for online condolences, please visit www.nickersonfunerals.com

In Memory Of Edward J. Wood