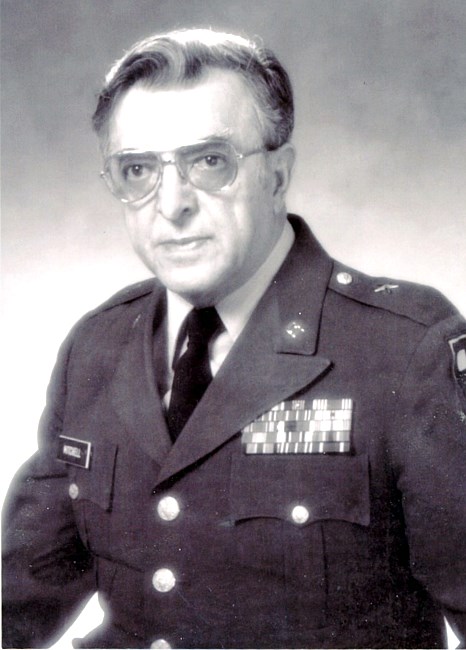 Brig. General George Mitchell, aged 93 ½ years old of East Orleans, MA (Cape Cod) passed away May 1, 2018. George is survived by his loving wife of 58 years Gloria, his three sons John, Robert and George, Jr, his daughter-in-law Beth and his grandson Benjamin. George was born October 8, 1924 at Maaser-El-Shouf, Lebanon and came to the United States as a naturalized citizen of the United States. He resided most of his life in the State of Connecticut before retiring to Cape Cod, Massachusetts and Naples, FL. In education he graduated Manchester High School, Manchester, CT. Then went on to the University of Connecticut graduating with a Bachelors Degree of Science in Education. From there, George attended Springfield College graduation with a Masters Degree in Education in 1959 with a published thesis. After Springfield College, George attended the University of Hartford, Hartford, CT earning a Sixth-Year degree in Education in 1961. He has also completed 90 percent of course requirements toward a Doctorate Degree. George became an educator and physical education instructor in the public-school system. He taught physical education, coached Varsity Baseball and supervised the Intramural Program from September, 1954 to June, 1955 at the University of Hartford, Hartford, CT. At Southington High School, Southington, CT George taught physical education, health first aid, coached Junior Varsity Football, Baseball and Basketball from 1955 to 1963. At Bloomfield High School, Bloomfield, CT, George taught Biology and Physical Education, coached Football, Basketball and Baseball from 1963 to June, 1967. He then became a Guidance Counselor at Windsor Locks High School, Windsor Locks, CT from 1967 to 1990 retiring from Windsor Locks High School in 1990. When World War II broke out, George enlisted in the United States Army becoming a Sergeant serving actively in the European and CBI (China, Burma, India) Theater of Operations from 1943 to 1946. During the Korean War George served in the United States Army as a Warrant Officer. He served as well in the United States Infantry Rifle Company from 1950 to 1952. He was in the United States Army Reserve serving as Special Assistant to Chief of Staff, Inspector General, AC of S G2, Provost Marshall, Special Services Officer, Post Exchange Officer, Director Branch Officer Basic Course. In the United States Army Reserve, George achieved the rank of Colonel in the Connecticut National Guard as USAR Liaison Officer from 1974 to 1983 culminating with the distinction of being named Brig. General in 1983 In military education George completed the basic course in 1960. He completed the advanced course in 1965. He graduated Command and General Staff College at Fort Leavenworth, Kansas in 1974. In April, 1975 George graduated the National Security Management Course. In total he had spent 41 years military (Army), WW II and Korean War including active duty, 7 years and Reserves 34 years. His military awards include the Army Commendation Medal in 1975, the Meritorious Service Medal in 1977, the Army Commendation Medal (1st Oak Leaf Cluster) 1979, the Connecticut Medal of Merit 1983 and the Meritorious Service Medal (1st Oak Leaf Cluster) 1983. George’s other diversified accomplishments include 66 years in professional comedy basketball including owner of the Harlem Superstars and Harlem Rockets Comedy Basketball Teams. He owned and directed for 17 years Glen Haven Day Camp, a day camp for boys and girls in Ellington, CT. He was the NBA’s Boston Celtics Harford, CT representative for 16 years during the 1967 to 1983 seasons. George also had the distinction over 7 years as serving as the State of Connecticut Baseball Commissioner. George was involved during 1967 to 1969 as the Hartford representative of World Team Tennis’ Boston Lobster during their matches in Connecticut. He served also as the agent of the Harlem Magicians Comedy Basketball team during the 1963 to 1985-time frame. Comedy Softball represented by the King and His Court and the Queen and Her Court kept George busy as their agent during 1954 to 1990. George was proud to be elected to the Hall of Fame, East Hartford, CT in 1981 and in 2004 the Hall of Fame in Manchester, CT. George had organization affiliations with the Connecticut Personnel Guidance Association, the Connecticut Education Association, the National Education Association and the Connecticut High School Coaches Association. In addition to the above-mentioned education affiliations, George’s military affiliations included the following: Association of the United States Army, the Reserve Officers Association of the United States, 43rd Infantry Veterans Association, the 76th Infantry Veterans Association and the CBI Theater Veterans Association. In lieu of flowers memorial donations may be made to the following organizations: Saint Judes Childrens’ Hospital, Shriner’s Children Hospital and Disabled American Veterans Charitable Service Trust. For online condolences please visit www.nickersonfunerals.com. “Old Soldiers Never Die” “They Just Fade Away”
See more See Less