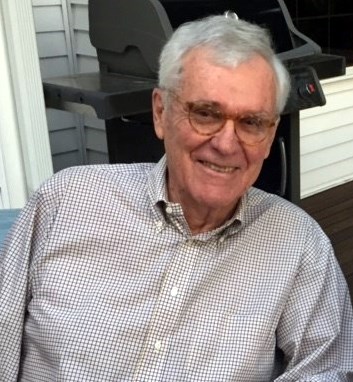 After a brief battle with cancer, Thomas Raymond Martin passed away on August 18, 2017. Tom is survived by his loving wife of 26 years, Elizabeth Deyo Garner Martin "Betty," whom he adored and with whom he learned the joy of traveling and fly-fishing at Megantic . He is also survived by the joys of his life, his four children, Paul, Bruce (MaryJo), Jim (Kathy), and Peggy, as well as his sister, Joan Burke, his brother, Bruce (Sue) Martin and Betty's children whom he loved very much, Linda (Larry) Kelly, David (JoEllen) Garner, and Bill Garner. Tom got the greatest pleasure from his marvelously wonderful grandchildren, Zachary, Kevin, Andy (Grace), Tom, Maggie, Annie, Liz, Kate, James, Josh, Zachary, Matt, Christian, Steven, Hayden, Megan (Brian) and Jamie, and two great grandsons, Will Martin and Elijah Connolly.

Tom was predeceased by his first wife, high school sweetheart, and mother of his children, Dell Stone Martin, with whom he discovered the beauty of Cape Cod. He was also predeceased by Betty's son and daughter-in-law, Steve and Patrice Garner.

Tom was born in Brooklyn, New York, and always proud of his Irish heritage. He grew up in Wilton, Connecticut, attended Staples High School, and was a proud graduate of Fairfield University. Prior to retiring to Cape Cod, his career was spent working for American Can Co. in New Jersey, Detroit, St. Louis and Connecticut.

A memorial service will be held Monday, August 28, 2017 at 11 am at St. Joan of Arc Catholic Church in Orleans, MA. Burial will be private.

In lieu of flowers, donations can be made to Cranberry Hospice, The Jimmy fund or any other charity of one’s choice.

In Memory Of Thomas Raymond Martin