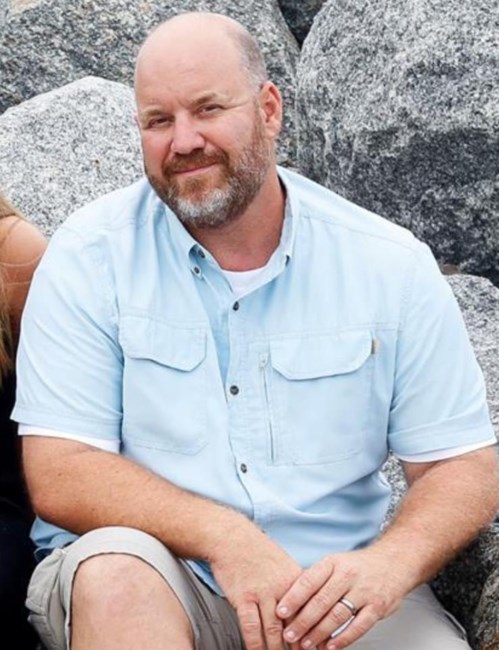 Brian William Davidson, 51, of Ormond Beach, FL passed away on September 8,2022 surrounded by family and close friends. He was a devoted husband for 26 years to Dana Davidson and a loving father to Claudia Davidson (24) and Thomas Davidson (18). He was born on November 11, 1970 in Fort Devens (Shirley), Massachusetts to Luther William Davidson, Jr. and the late Eva Barbel Beinlich Davidson. He has one sibling, David Gerhard Davidson. Brian spent his early years as an Army “brat,” living in Crailsheim and Berlin, Germany, West Point, NY, and El Paso, Texas before settling in the Daytona Beach area in 1981. He graduated from Spruce Creek High School in Port Orange in 1988. He then attended and graduated from Florida State University with a bachelor’s degree in Economics in 1992. He remained a dedicated FSU football fan for the remainder of his life, something Thomas inherited from him. You should have heard the yelling coming from the Davidson household on FSU gameday. Immediately after graduating FSU, Brian took a “temporary” job at Martin Paving while he looked for something more permanent. That temporary job turned into a career spanning 30 years. After Martin Paving, he worked for Phillips and Jordan and APAC before becoming a member of the P&S Paving family in 2005. The word “family” is not used lightly; the people he worked for and with were a close-knit group who shared not only work, but also friendship in good times and bad. Brian annoyed his coworkers at times with the obnoxiously loud music he blasted in his office, but those same coworkers probably feel that the halls of P&S are a bit too quiet now. The Davidson household has most definitely been too quiet since Brian’s passing. His wide-ranging musical tastes often played throughout the household and served to create a close bond between Brian and Claudia, who also grew to love a diverse array of music. They often attended concerts together, and Claudia even finally convinced him to attend a Broadway musical with her. Brian and Dana started dating the summer after high school and never looked back. At first, some thought they were an odd match because anyone who knew Brian could tell you he was loud and opinionated, while Dana was a bit of an introvert, but they brought out the best in each other. They went through the ups and downs and in-betweens of life together, honoring their sacred vows to love each other “for better, for worse, for richer, for poorer, in sickness and in health, to love and to cherish, until parted by death.” Dana and Brian had just become “empty nesters,” as Thomas graduated from high school this past May. They talked about future plans of traveling the country via RV and visiting national parks. Some will say the lesson here is to “take the trip now” because you never know how long you have. Once Brian was diagnosed with cancer (only 6 weeks before he passed), they discussed this and agreed that neither of them regretted not “taking the trip” because that meant they were home together with their family, enjoying the quiet moments. They lived fully in those moments and had no regrets about choices they made. Those quiet, personal times are those you will miss the most, so cherish them. Brian was known for his love for his family, strong work ethic, competitive streak, and willingness to help a friend. Everyone who knew Brian loved him. He was the life of every party. His sarcastic sense of humor never veiled his deeply genuine, giving heart. He was always the first to volunteer to help a friend or coach a team. On weekends and evenings, you could find Brian working on his Porsche in the garage, playing cornhole, watching a Formula One race, drinking a beer in the backyard, hanging out with his dogs, or volunteering at a baseball concession stand. He lived and loved loudly, and that voice will forever be missed. In lieu of flowers, please consider making a donation to the Pancreatic Cancer Action Network https://pancan.org/donate Fond memories and expressions of sympathy may be shared at www.volusiamemorialfunerals.com for the Davidson family.
See more See Less

In Memory Of Brian W Davidson