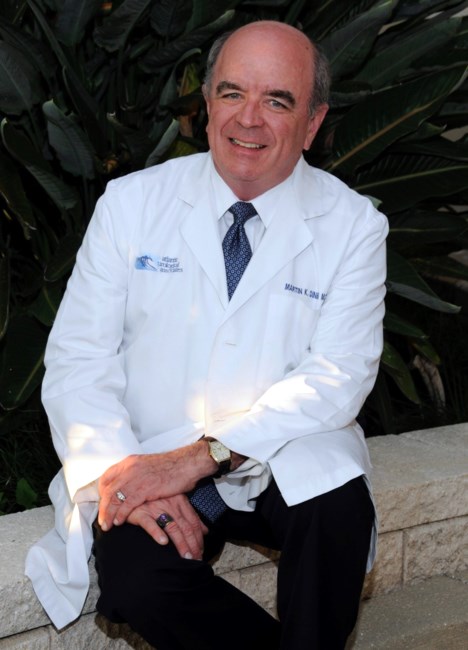 Martin K. Dineen, MD, FACS (1952 – 2023) It is with great sadness that we announce the untimely death of Martin K. Dineen, MD, FACS, who passed away at home on January 13, 2023 surrounded by family and friends after a short but hard-fought battle with cancer. Marty was born in Corning, NY, to John and Barbara Dineen, the eldest of 6 children. He earned his Bachelor of Science in Biology from the University of Notre Dame (1974) and his medical degree from Louisiana State University in Shreveport (1980). He also completed his surgical internship and residency in urology at LSU before continuing on to a fellowship in the Department of Urologic Oncology at Roswell Park Memorial Institute. Upon moving to Ormond Beach, FL, in 1987, he joined Atlantic Urological Associates (now Advanced Urology Institute) and began his urologic practice that would span 42 years. A member of the American Urological Association (AUA) since 1990, Marty was a leader in urologic health policy. He served for 17 years on the AUA Public Policy Council and for 15 years on the AUA Coding & Reimbursement Committee, in addition to serving on the Board of Directors from 2019-2023. The AUA Southeastern Section recognizes Dr. Dineen with the Gee-Dineen Socio-Economic session at each annual meeting. In 2016, he was awarded the AUA Distinguished Service Award for over two decades of outstanding leadership in Health Policy as well as humanitarian service in Haiti to eliminate the scourge of urogenital elephantiasis. Since October 2006, Dr. Dineen worked with fellow AUA members in Leogane, Haiti, to perform over 2,000 hydrocele surgeries in a difficult and under-resourced environment. Dr. Dineen was recognized by his University of Notre Dame physician Alumni peers with the 2014 Dr. Tom Dooley Society Founders Award for his humanitarian efforts. Most recently, Marty was awarded the Lifetime Achievement Award for his immense contributions to the field of urology by the Florida Urological Society in September 2022. Dr. Dineen was very active in, and committed to, organized medicine and the support of Urology, serving as: President of the American Association of Clinical Urologists (AACU) (2015-2016), President of the Southeastern Section of the AUA (2008-2009), and President of the Florida Urological Society (2002-2003). He was also a founding member of the Board of Directors of the Urology Care Foundation since its inception in 2012, serving until 2016. Marty was also an early proponent and pioneer of Ambulatory Surgical Center (ASC) development and the movement of inpatient urological services to the outpatient setting, founding one of the first ambulatory surgery centers in the nation. Dr. Dineen held appointments as a clinical Assistant Professor of Urology at The University of South Florida School of Medicine in Tampa, FL, and as Associate Professor of Urology at The University of Florida Health Sciences Center in Gainesville, FL. He was an incredible mentor to dozens of urology residents from both of these programs and truly enjoyed teaching his surgical skills and medical acumen to them. He served as a peer review editor for the medical journal UROLOGY for over a decade, as well as for UROLOGY PRACTICE since its inception in 2014. Marty was a remarkable, humble man, a wonderful husband, a loving father, grandfather, brother, son and physician. God truly gave him a gift for healing others through medicine and his surgical skills. He was a talented singer who sang with the Daytona Beach Bel Canto singers for many years, a gifted piano player, pilot, and was also well known for his delicious pies. He will be long remembered for his sense of humor, generosity and selflessness in caring for others - his patients and the people of Haiti, particularly the school Ecole L’Erudit de Leogane, where there is a medical clinic currently being built in his honor. As extensive and impressive as his medical accomplishments were, he was most proud of his family. He coached several local sports teams that his kids participated in, as well as sponsored several teams throughout the community. Like his father before him, he was an Eagle Scout, a tradition that continued with his son Ryan, for whom he served as a Boy Scout troop leader. Marty is survived by his wife Marianne Dineen, his children, Dr. Michael Dineen, MD (Chelci), LCDR Martin Dineen, Jr (Juliana), Ryan Dineen, and Dr. Lauren Manley, PhD (Spencer), siblings Patricia Dineen, Elizabeth Crone (Dean), James Dineen (Whitney), John Dineen, Jr. (Beth), and Barbara Brown (Rich), and 6 grandchildren: Connor, Vitoria, Liam, Charlotte, Spencer, and Adair. He was preceded in death by his parents John and Barbara Dineen. A service of celebration and thanksgiving for Marty’s life will be held at Prince of Peace Catholic Church, 600 S. Nova Rd., Ormond Beach, FL on Friday, February 17, at 2:00 p.m. Interment will be at the Volusia Memorial Park Cemetery, followed by a reception at The Casements (25 Riverside Drive, Ormond Beach). In lieu of flowers, memorial donations can be made to Ecole L’Erudit de Leogane, a school providing healthcare, nutrition, and education to some of Haiti’s poorest children. Direct donations to www.intervol.org/dineen or via check to InterVol at 100 Kings Highway South, #1200, Rochester, NY 14617. Please specify that the donation is intended for “Ecole L’Erudit, in memory of Marty Dineen.” Fond memories and expressions of sympathy may be shared at www.volusiamemorialfunerals.com for the Dineen family.
See more See Less