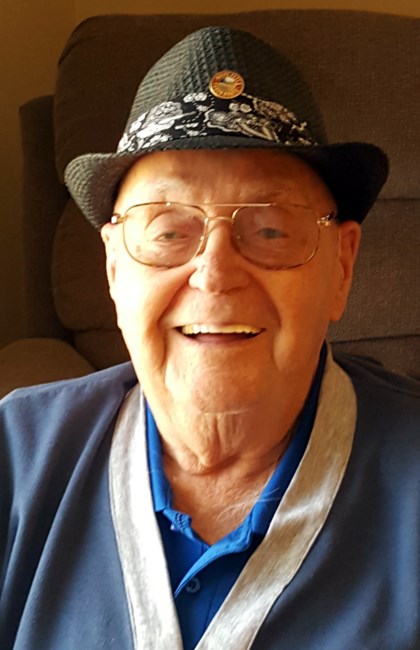 The family of Gordon Chalmers Foster sadly announces his passing at Fairview Lodge, Whitby, Ontario on Wednesday, April 1, 2020 in his 93rd year. Much loved husband of Audrey for 70 years. Beloved father of Lynn Alcock (Alan), Sheila Iacono (Gaetan), Gordon (Cathy), Frank (Naomi) and Michael (Pamela). Loving Grandad of Sherry, Dawn, Melanie, Lisa, Daniel, Stephanie and Sera and nine great-grandchildren. Dear brother of Patricia Hodgson. Predeceased by brothers John, Robert and Frank and sister May Carr. Also missed by many nieces and nephews. Gordon was a locomotive engineer for Canadian National Railways in Montreal from 1950 to 1987. A celebration of his life will be scheduled when travel is permitted. Gordon was born April 12, 1927 in Verdun, Quebec to Robert Gordon Foster and Mary Ann Campbell Chalmers. Gordon's father was a yardman then engineer for Grand Trunk Railway/CNR and Gordon followed early in his footsteps. He was working part time at the CN at about 13 years of age; he was getting "eats" for the office girls at the restaurants on Notre Dame Street as the cafeteria in Bonaventure Station had burned down. Gordon attended Verdun High School on Argyle Avenue until completing grade 10 when he left school to join the military. Gordon enlisted in the Canadian Infantry Corps as a private on 16 January 1945. He served in Canada and was sent to the Canadian Driving and Maintenance School, at Woodstock, Ontario, which gave courses in Advanced Driving and Maintenance for both wheeled and tracked vehicles. Gordon then attended the Canadian Army Trade School located in the former Libby-Owens plant on Kenilworth Avenue North in Hamilton, Ontario. Gordon was discharged from the service under Routine Order 1029 para 5 by reason of demobilization to return to civil life on 19 October 1945. After the war, Gordon was living with his parents and his brother Frank at 1107 Brown Blvd. Verdun, Quebec. He was working as a driver for Kane's Drugs and was introduced to the love of his life, Audrey Conrick, by her sister Norma who also worked there. Gordon and Audrey were married at St. Gabriel's Parish, 2157 Centre Street, Montreal, Quebec on 15 July 1950. They honeymooned in New York State and returned to Montreal to reside in Pointe-Saint-Charles. Gordon and Audrey raised their family in several areas of Montreal and Chateauguay over the next 40 years. He was a loving father, grandfather and great grandfather famous for his "Sunday jokes". Gordon was certified as a fireman for Canadian National Railways on 19 July 1950 and then as a locomotive engineer by 1974. He worked 37 years for CN retiring on December 14, 1987. Following retirement from CNR in Montreal, Gordon and Audrey lived in Wasaga Beach, Ontario from 1997 to 1999 and then moved to Brantford to be close to Audrey's siblings, their families and several close friends. Gordon was a proud member of the Dunsdon Legion Branch 461 in Brantford. Gordon and Audrey moved into retirement living in Whitby, Ontario in 2011 but he continued to support Branch 461 and he received his 25 year pin a few years ago. Gordon and Audrey moved to Fairview Lodge in the summer of 2016. Gordon quickly became a fixture of the home, with his signature hat, high fives and contagious smile. He greeted Emma and Jack, the home's love birds, with a joyful "Hello" every day. He enjoyed the sunshine on warm days and could be found near the fish tank or looking out the windows and singing with Brenda, their special aide, on her frequent visits. Gordon always spent visits asking about and sending love to his children and grandchildren and their spouses. He was especially proud of all his great grandchildren. All the family would like to send special thanks to Dr. Libby and all the nurses and personal support workers at Fairview Lodge for their excellent care and compassion. Gordon loved all the staff; the physio, cleaners, dietary, recreation, reception staff, the volunteers and all others who he saw daily. Gordon always said how he loved living at Fairview Lodge.
See more See Less

In Memory Of Gordon Chalmers Foster