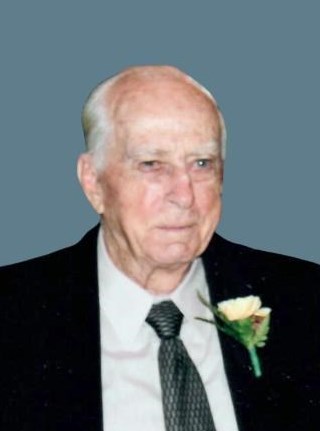 John "Jack" Wallace Tisdall, age 103, of Oshawa, Ontario passed away peacefully on Tuesday, June 28, 2022 with his family by his side. Jack was born in Edmonton, Alberta on October 30, 1918. He was raised by his late parents, Ethel and Stan Tisdall. Jack was a great hockey player as a young man. He was known as Jack “Regina” Tisdall and he came to Oshawa when he was 20 years old. He played for the “Oshawa G-men Seniors” (now known as the Oshawa Generals) and also for the Peoples Credit Jewelers in Toronto. Jack also served his country as a young man, in World War II he was in the army and served for 2 years overseas. He was one of the few Veterans living at Hillsdale Estates. Jack was married to Edna and they had two children together: Joan O'Connor (Breen) and the late Janna Cowan (Graham). The family grew over the years to add 3 grandchildren; Breen O'Connor (Susan), Andrew O'Connor, Sarah O'Connor (Deric). and 5 great-grandchildren, Ella, Jack, Claire, Hazen, and Macy. Predeceased by his brother Gerald and sister Eileen. he will be lovingly remembered by his extended family and friends. Jack lost Edna some time ago. He later remarried, Kaye in August of 2000 at the age of 81. Jack worked at General Motors in the Oshawa office for 42 years. He is also a member of Kingsview United Church in Oshawa and used to be a Florida snowbird after retirement when he travelled to Clearwater for 30 years. Jack always enjoyed watching sports, particularly hockey! In lieu of flowers a Donation in John's name can be made to a charity of your choice. A special thank you to the staff at Hillsdale Estates Honey Harbour for their care and compassion over the years. A visitation for John will be held Monday, July 4, 2022 from 10:30 AM to 11:30 AM at the Oshawa Funeral Home, 847 King Street West. A funeral service will take place Monday, July 4, 2022 at 11:30AM. Interment to follow at Mount Lawn Cemetery, 21 Garrard Road, Whitby. Fond memories and expressions of sympathy may be shared at www.oshawafuneralservices.com for the Tisdall family.
See more See Less