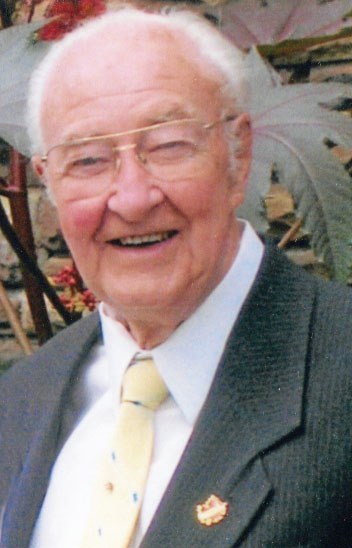 It is with profound sadness that we announce the peaceful passing of Vern Wright in Lakeridge Health Oshawa, Palliative Wing, at 99 years of age.

Vern was the beloved husband of Ruth (Clark) for 68 years, predeceased by his first wife Noreen (Wilson) in 1948, and his sister Eileen and brother-in-law Alfred Statham.

He was the loving father of Doug (Leena) in British Columbia; Bob (Norma) in Wellington Ontario; Marion (Jody) in Melbourne, Ontario; Don (Sandra) in Oshawa, Ontario with 7 grandchildren and many great grandchildren, loved by many nieces and nephews.

He was a loyal employee of Bell Canada for 37 years. Vern was involved with several singing groups for over 70 years and was a soloist often, with no formal training.

Vern enjoyed “tinkering” in his workshop. If you needed a tool that didn’t exist, he could make it; if it was broken, he could probably fix it!

Travelling as a family and then with his best friend, Ruth (throughout North America and then Europe) was a favourite pastime—photographing everything on the way.

Retirement was spent in Fenelon Falls and was almost as many years as he worked when he lived in Oshawa. “I’ve never regretted our move to Fenelon Falls”, but after 35 years, it was time to move back.

Thank you to the home care team, Dr. McAllister and the supportive team at Lakeridge Health Oshawa.

In lieu of flowers, donations to your local food bank would be appreciated.

A Celebration of Life will be held at a later date.

Absent from the body, present with the Lord.

In Memory Of Vernon Maurice Wright