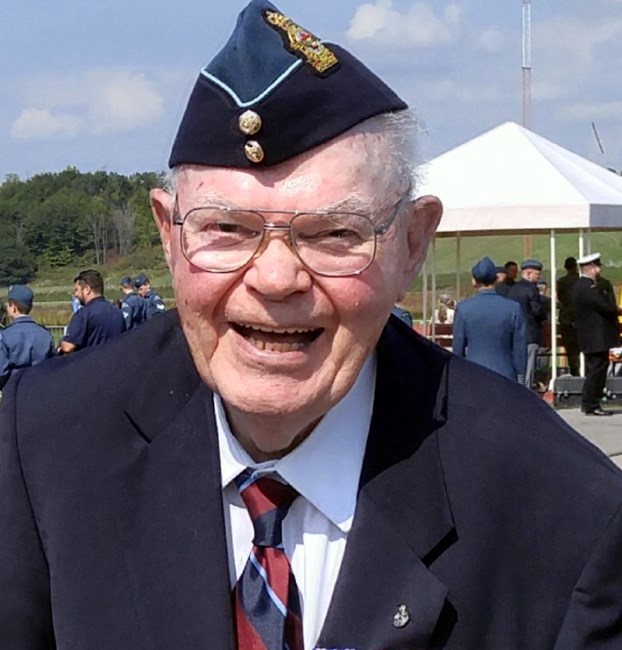 Pipe Major Bob Tracy (RCAF Major Ret’d, MSM, CD) passed peacefully in his sleep at the Perley Health Foundation in Ottawa on March 29 at the age of 90. Bob served most of his career in the Royal Canadian Air Force starting as an Air Cadet at age 16, and then working up the ranks beginning as an LAC aircraft technician, photographer and bagpiper (to get out of KP duties) to Major in various roles, spending most of his time in communication and public relations. After serving a stint as the editor of Sentinel Magazine at DND HQ, he moved to Colorado Springs in NORAD HQ. It was there that he formed the Pike’s Peak Highlanders pipe band which eventually led him to his lovely wife Trudy. They spent several years in Colorado before returning to Ottawa, where he took on the role as director of the Airforce Association until finally re-retiring at age 72. During this time, he joined yet another pipe band, the Highland Mist as a pipe major in the Ottawa area, where both he and Trudy played. During his retirement years afterwards, he remained active with all things Scottish, bagpipes and Air Force, including Battle of Britain commemorations where he was treated as a well respected VIP. Bob is survived by Trudy, daughters Laurie Barnes and Cindy Moors and his son Dave Tracy. His first wife Patricia and eldest son Robin predeceased him many years ago. He also dearly loved his stepdaughter Evie who also passed a few years ago and his niece Max Miller. Bob also has two grandsons, a step grandson and a step grand daughter and three great grandchildren. He will be missed by those that survive him and will meet up with his old buddies that have passed before him. No doubt they will form yet another pipe band at the Pearly Gates. It’s entirely possible that they will convince St. Peter to join up as well. Our family wants to thank the extremely kind and professional staff and volunteers at the Perley Foundation who always went the extra mile in making him happy and comfortable in his last days. Rest in peace Bob. Bob’s celebration of life will take place on Tuesday, May 24, 2022 at 2 pm with a service and a reception at Racine Robert and Gauthier Funeral Home 180 Montreal Road, Ottawa ON K1L 1B4 His celebration of life can also be viewed live and for replay at https://funeraweb.tv/diffusions/51950 For more info on some of Bob’s history, please visit the URL that the Perley Foundation set up with him during his tenure at their facility. https://perleyhealthfoundation.ca/stories/blog/a-home-where-music-camaraderie-and-care-live-in-perfect-harmony/ Or search for “Pipe Major Bob Tracy” In memory of Bob, donations can be made to the Perley Health Foundation.
See more See Less

In Memory Of Bob Tracy