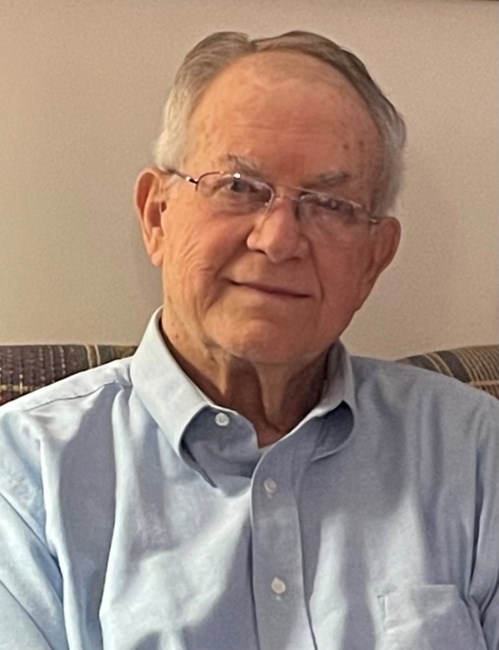 Larry Lewis Becker, 86, of Papillion, NE passed away surrounded by his family Monday, February 14, 2022. Larry was born March 3rd, 1935, in Great Bend, KS, to Lou and Ellen Becker. He graduated from Great Bend High School in 1953, Emporia State University in 1959, and earned a Master's Degree from University of Colorado in 1971. Larry married "the Girl of his dreams", Joy Benton, on June 5th, 1957. After finishing his degree, Larry secured his first teaching job, and he and Joy moved to Littleton, CO. Larry taught physical education at three Littleton area elementary schools and Isaac Newton Middle School, before helping to "open" Arapahoe High School in 1967. Larry taught business classes and physical education at Arapahoe, and during his years there coached football, gymnastics, and swimming/diving. In his seven years at Arapahoe, Larry coached two state-championship swim teams, won several conference titles, and coached seven all-American swimmers. More importantly, while teaching and coaching at Arapahoe, Larry positively influenced many staff members and students and forged deep connections, many of which continue to this day. Wanting to be closer to family, Larry and Joy reluctantly left Littleton and relocated to Great Bend, KS in 1974. Larry continued his teaching and coaching career in Great Bend, eventually teaching and coaching at his alma mater, GBHS, until his retirement in May of 2000. While in Great Bend, Larry served as an assistant football coach and head boys and girls swimming coach. As head swim coach in Great Bend Larry had 506 career wins and won several conference championships. Larry's success as a coach was recognized by the Kansas State High School Athletic Assoc. when he was named Coach of the year in 1984, 1985, and 2000. He also received a National High School Scholastic Coaches Award in 1989. Larry was inducted into the GBHS Hall of Fame in 2017. Larry continued to forge strong connections in Great Bend and made a lasting impact on the lives of many students and colleagues. Larry and Joy were active members of the Church of Christ in Great Bend, and Larry served the congregation there as an elder for 18 years. Larry was also very active in Boy Scouts. He was an Eagle Scout, achieved the Order of the Arrow, Vigil Honor, and served as Lodge Chief for the state of Kansas. Larry continued his involvement in scouting by serving as Assistant Troop Leader, while sons Rod and Jeff were active in scouting. Following his retirement from teaching and coaching in 2000, Larry and Joy moved to Papillion, NE to be near their daughter, Kayla, and family. Larry was a master woodworker, and built an amazing woodworking shop in the basement of their Papillion home. He willingly completed requested projects, and lovingly gifted family and friends with masterpieces that adorn our homes and will remind us always of his generosity, skill, and care. Since their move to NE, Larry and Joy have been active members of Southwest Church of Christ, and Larry served as an elder there for 15 years, stepping down just two weeks before his death. He was a beloved servant to the family at Southwest. He used his mechanical and woodworking skills to make enhancements and repairs to the church building, and was a cheerful "fixture" at the front door each Sunday, greeting and chatting with people as they arrived. "Coach" Becker continued to hold a special place in his heart for young people, and was always a faithful encourager to the youth of the congregation. Larry is survived by his loving wife of 64 years, Joy; two children--Kayla Banister, and husband, Brent, of Papillion, NE; and Jeff Becker, and wife, Brenda, of Spring, TX. He was preceded in death by his older son, Rod, who passed away in 2018. Rod's wife, Fabiola, lives in Des Moines, IA. Larry has nine grandchildren--Fabiola (and husband, Jose); Fernanda (and husband, Joey); Sophie; Logan (and wife, Megan); Spencer; Molly (and husband Zach); and Mason; Aaron; Levy; and two great-grandsons, Diego, and Anthony. Larry is also survived by "adopted" daughter, Beverly (Willms) Nobrega, and husband Paul, and daughters, Bailey, Madison, and Kendal; and numerous beloved nieces, nephews, extended family members, and dear friends. Larry "Coach" Becker was a devoted Christian, loving husband, nurturing father, doting "papa", and loyal friend. He formed instant connections with everyone he met, and was a positive presence in every phase of his life. While his physical presence will be sorely missed, we rejoice in his eternal victory and will continue to be blessed and comforted by his legacy for many years to come.
See more See Less

In Memory Of Larry Lewis Becker