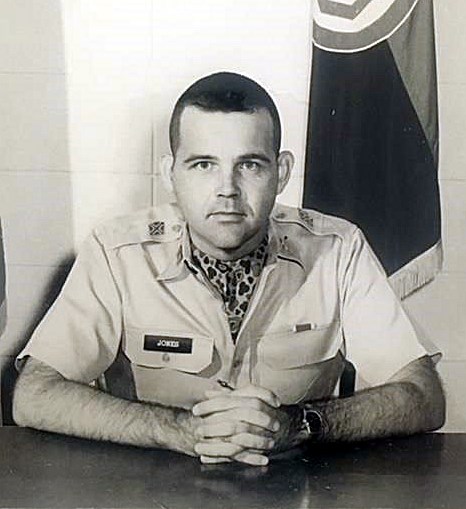 Brig. General James Lee Jones, formerly of Brandon, died June 26, 2018 in Atlanta, Georgia following injuries sustained in a fall. He was a native of McComb, MS born January 16, 1939, the son of the late W.K. Sr. and Mrs. Emma Jones of McComb. He graduated from McComb High School and Excelsior College. Jones began his military service on April 24, 1955, when he enlisted in the Mississippi National Guard’s Company L, 155th infantry in McComb and ended April 20, 1992, upon his transfer to the retirement reserves. Four days short of completing 37 years of service. Most service was in the National Guard with tours of active duty over the years. His early service was split between the Guard in the McComb unit and later in the Headquarters, 31st Infantry Division of Jackson, while also working fulltime in the newspaper business and as a Correspondent with United Press International. He later accepted a fulltime position with the National Guard in the Office of the Adjutant General of Mississippi. He served for more than 20 years as the Public Affairs Officer for the Mississippi National Guard and Mississippi Military Department. He attained the enlisted rank of Staff Sargeant prior ro attending Officer Candidate School and being commissioned a Second Lieutenant in 1960 with his promotion to Brigadier General upon his retirement from the National Guard. The awards and decorations he received during his military service include the Legion of Merit, Meritorius Service Medal with 3 Oak Leaf Clusters, Army Commendation Medal with2 Oak Leaf Clusters, Army Reserve Component Achievement Medal, National Defense Service Ribbon, Humanitarian Service Medal, and state awards including the Mississippi Magnolia Cross and the Mississippi Magnolia Medal. He was a life member of the Military Order of World Wars, National Guard Association, American Legion Post 110, Forty and Eight, and Military Officers Association of America. He served many years as Adjutant of his American Legion Post and Jackson Chapter, MOWW, and served as State Finance Officer for the American Legion, Department of Mississippi. Jones is survived by his wife of 54 years, the former Glynda Bullock of Bassfield. They have one daughter, Shannan Berry and her husband, Doug of Peachtree City, GA; four grandsons-Jack Berry of Pensacola, FL, Mills, Burke, and Kell Berry of Peachtree City, GA; and his sister, Pat Smith of Baton Rouge, LA. He and Glynda were members of Crossgates Baptist Church in Brandon. Services will be held at Baldwin and Lee Funeral Home in Pearl on Saturday, July 7, 2018. Visitation will be at noon with a service to follow at 2pm.
See more See Less

In Memory Of James Lee Jones