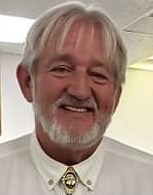 NORTH PEKIN ~ Leonard “Lenny” Sampson Martin, passed away at 2:42 p.m. Thursday August 11, 2022 at OSF St. Francis Medical Center in Peoria. Lenny was born to Andrew and Patricia Martin on August 16, 1960 in Peoria, they preceded him in death. He was also preceded in death by his lifelong friends, William and Fred Moritz. He is survived by his wife Debra Townsend of North Pekin, one daughter, Brittney (Chris) Clack of Texas; three sons, Bryson Latham, Dusty (Tracie) Markey and Russ Townsend; five grandchildren, Caylynn, Harley, Chase. Nicholas and Hunter; one cousin, Tawnia (Jay) McGinnis of Peoria; lifelong friends Ed and Linda Moritz of Warsaw, Illinois; his Warsaw Gang; many other family and friends and beloved dog Hank. Lenny worked as a Millwright for many years for Local 1051. Lenny enjoyed spending time with his family and grandchildren, fishing, motorcycles, and woodworking. He was an avid Chicago Cubs fan and was a big supporter of the United States Armed Forces. Lenny never met a stranger and had an infectious laugh. A gathering celebrating the life of Lenny will be held at a later date. In lieu of flowers, memorial contributions may be given to American Heart Association, 300 South Riverside Plaza, Chicago, Illinois 60606. Cremation has been accorded by Preston Hanley Funeral Home & Crematory in Pekin. To express condolences online, visit www.preston-hanley.com
See more See Less