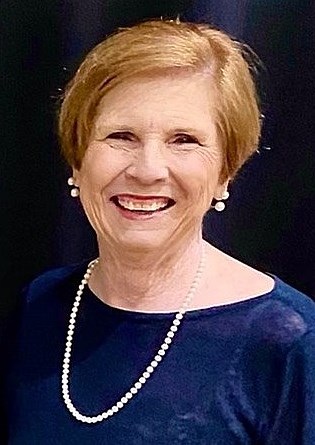 Sarah Sharon McEwen Yeager, 75, of Pelham, Alabama passed away suddenly on June 16, 2022. Born in Birmingham, Alabama on May 28, 1947, Sharon graduated from W.A. Berry High School in Hoover, Alabama and attended Belhaven University in Jackson, Mississippi. Sharon was a beloved mother and grandmother, world traveler, faithful military wife for 30 years, and a servant of Christ. Like her mother, Sharon never met a stranger and, no matter the situation, always exuded southern class and charm. She had a passion for reading and was a dedicated volunteer to her community and her church, St. Stephens Episcopal Church in Vestavia Hills, Alabama. Sharon was preceded in death by her husband of 43 years, Captain David W. Yeager, and her parents, Charles K. and Ruby O. McEwen of Birmingham. Sharon is survived by her son, David William Yeager (Wendy), Athens, Alabama; daughter, Sarah Yeager Thornton (Michael), Annapolis, Maryland; and her four grandchildren, Taylor Thornton (Morgan), Duke Yeager, McEwen Thornton, and Seth Yeager. Visitation will be held on Wednesday, June 22, 2022 from 12 p.m. to 1 p.m. at Ridout's Southern Heritage Funeral Home in Pelham, Alabama. The graveside service will be Wednesday, June 22 at 1:30 p.m. at Pelham City Cemetery, followed by a Memorial Service at St. Stephens Episcopal Church at 3 p.m. In lieu of flowers, the family suggests gifts to be sent to St. Stephens Episcopal Church of Vestavia Hills, Alabama.
See more See Less

In Memory Of Sarah Sharon Yeager