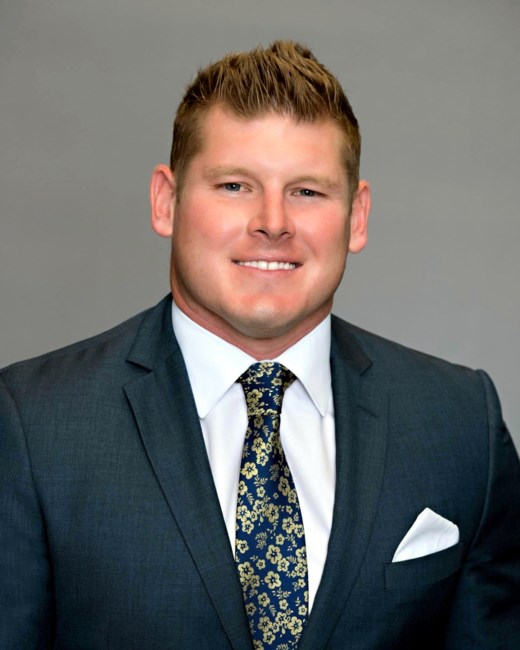 Tyler Burkes Threadgill of Pelham, Alabama passed away on Sunday, September 12, 2021, at the age of 36. He was born on December 26, 1984 to Bruce and Angie Threadgill. Tyler was raised in Philadelphia, Mississippi and attended Philadelphia High School where he was a star athlete and held the record for most touchdowns in Mississippi 3A football. After graduating high school, he attended Mississippi State where he majored in Public Relations and played football for the bulldogs from 2002-2007. Tyler always said “Family is everything.” His most precious joys were his wife, Leslie, and their 4 year old son, John Tyler. Tyler was known for having a great sense of humor and always being in a great mood. People gravitated toward him because of his kind spirit. Tyler enjoyed a good game of golf, hunting, kayaking, working out, and being with friends. His favorite pastimes were spending time with Leslie snuggling, and scooter rides and tickle fights with JT. He loved being JT’s dad. Tyler knew how important traditions were and he relished in them. Football Saturday’s, grilling and smoking on the grill, and cheering on the Mississippi State Bulldogs were a few of his most cherished traditions. Tyler was a member of the Church of the Highland, a member of the Ross Bridge Golf League, an M-Club alumni member, and the Mississippi State Alumni Association-Alabama Chapter. He was also named one of Birmingham’s Top 20 under 40 for National Association of Insurance and Financial Advisers. Preceding him in death are his grandparents, Billy Joe Burkes; Joy D. Threadgill; Bobby P. McDaniel; and Majorie Webster Threadgill. Left to cherish his memory are his loving wife, Leslie Bullard Threadgill; his son, John Tyler Threadgill; his parents, Bruce and Angie Threadgill; his brother, Garrett Rhys Threadgill; and grandmother, Carlotta Burkes McDaniel. Visitation for Tyler will be held at Southern Heritage Funeral Home in Pelham, Alabama on Thursday, September 16, 2021, from 10:00 am to 12:00 pm with a funeral service beginning at 12:00 pm. Burial will follow at Southern Heritage Cemetery. In lieu of flowers, the family will be establishing a Mississippi State Scholarship Fund in Tyler’s memory. Those details are pending and will be announced at a later date.
See more See Less

In Memory Of Tyler Burkes Threadgill