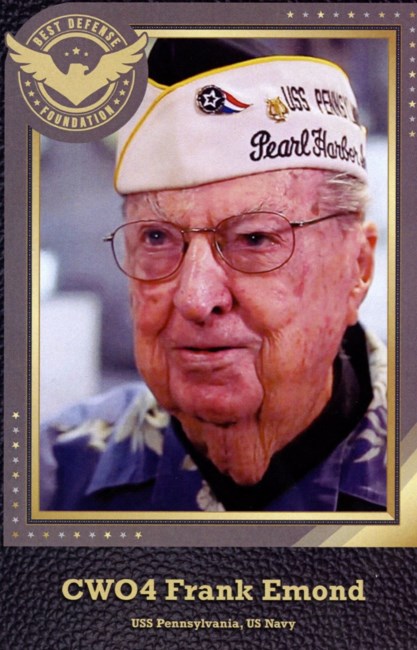 Frank Emond, born Francis Leroy Emond on May 21, 1918 in Pawtucket, Rhode Island, was the son of the late Louis and Agnes Emond. He departed this earthly life on January 10, 2023. Frank is survived and missed by his wife of 10 years, Pat; his son Roy (Gean Ann); his stepdaughters Debbie (Michael) Moore and Melissa Pace and stepsons Michael Wertanen and Matt Wertanen. His memory lives on in his grandsons Jason, Josh, Phillip, David (Naomi) and Brian (Melissa) and his great grandchildren Nicholas, Shane, Tyler, Elizabeth, and Kyle. Frank is preceded in death by his wife of 53 years, Evelyn; his son John; two brothers and a sister; his stepson Mark Wertanen and his wife of 8 years, Maxine. Frank enlisted in the Navy in 1938. After attending the US Navy School of Music, he was assigned to the USS Pennsylvania. In late 1939, the ship was moved to Pearl Harbor, Hawaii. The morning of December 7, 1941 his band was lined up to play morning colors on the stern in dry dock across from Battleship Row. He saw a line of planes approach the harbor and watched as the first bomb was dropped on Ford Island. As the planes began firing, he could hear the bullets hit the turret behind him. Running to his battle station, he felt the ship shutter as they were hit by a bomb and caught fire. He served on a navy band cruise until the end of WWII. He retired from the Navy as a CWO4 in 1968 and made Pensacola his home. He managed operations at the Marina on NAS Pensacola for 12 years after retiring from the Navy. Frank loved to travel. Whether driving, camping, or cruising, he was always ready to go. Frank found joy in serving others. He was an avid American Red Cross volunteer at Pensacola’s Navy Hospital until he was 100 years old. He was often seen wheeling patients much younger than himself down the hospital corridors. He was always active in church where he could share his gifts with others. A hobby he picked up later in life was painting. He liked working with watercolors, oils and pen and ink. He was proud of his work and shared his creations with family and friends. Frank enjoyed many activities, but his passion was music. He began playing French horn in high school. This led to a music career in the Navy teaching and conducting. Frank picked up his conductors baton 43 years after retiring from the Navy and began conducting the Pensacola Civic Band. Since then he has conducted the Gulf Coast Symphony and just last November the US Air Force Airmen of Note. In May 2019 he was officially recognized by the Guinness Book of World Records as the oldest conductor. When asked what lead to such a long life, Frank would say just do good. His legacy will carry on reminding us that we control our attitudes and should live a life of meaningful acts of love and service, like Christ molded for us. A visitation & reception for Frank will be held Friday, January 20, 2023 from 11:30 AM to 1:30 PM at Oak Lawn Funeral Home, 619 New Warrington Road, Pensacola, FL 32506. A funeral service will occur Friday, January 20, 2023 from 1:30 PM to 2:45 PM, 619 New Warrington Road, Pensacola, FL 32506. A graveside service will occur Friday, January 20, 2023 from 3:00 PM to 3:30 PM at Barrancas National Cemetery, 1 Cemetery Road, Pensacola, FL 32508. In lieu of flowers, contributions in Frank's memory may be made to Red Cross. https://www.redcross.org/donate/donation.html/?cid=donation_brand&med=cpc&source=google&scode=RSG00000E017&gclid=Cj0KCQiAlKmeBhCkARIsAHy7WVvzCbD4X_xHrYTX0FcR10a22TDoPH0mOK05rnMW2-HTGw5NfwTrjAoaAoI3EALw_wcB&gclsrc=aw.ds Fond memories and expressions of sympathy may be shared at www.oaklawnfunerals.com for the Emond, family.
See more See Less