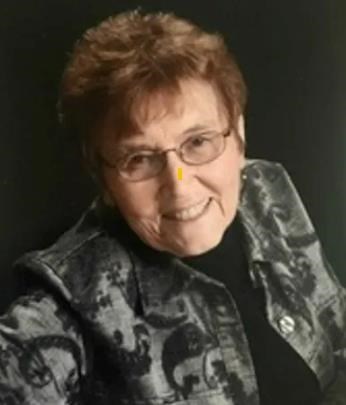 Martha Ann Allovio, 88, of San Antonio Texas, formerly a long-term resident of Peoria, Illinois, died at 4:30 p.m. on Thursday, April 14, 2022, in San Antonio, Texas. She was born on January 1, 1934, in Macomb, Illinois, to Arbon J. and Evelyn Schaberg Gingerich. She married Henry Allovio Jr. on August 16, 1953. He preceded her in death. Surviving are two sons, Jeffrey (Starrie) of San Antonio, Texas, and John (Joy) of Crawford, Texas; seven grandchildren, Jillian (Matthew) of Fuquay Varina, North Carolina, Jacqueline, Jessica and Jacob of San Antonio, Texas, Charles and Christopher of Crawford, Texas, and Madelyn of Belgrade, Montana; and two great-grandchildren, Cohen and Henry of Fuquay Varina, North Carolina. Also surviving is one brother, John Gingerich of Palm Springs, California. She was preceded in death by her parents; her brother, Alan Gingerich of St. Charles, Missouri; and her sister, Mary Jane Palley of Walnut Grove, California. She was a member of University United Methodist Church and Proctor Service Auxiliary in Peoria, Illinois. Cremation has been accorded. A memorial service will be at 3 p.m. Thursday, June 2, 2022, at the Davidson-Fulton Woolsey-Wilton Funeral Home, 2408 W. Willow Knolls Drive, Peoria, IL 61614, with the Reverend Matthew Curtis officiating. Visitation will precede the memorial service at 2 p.m. Her ashes will be buried in the Garden of Resurrection Mausoleum in Peoria at a later time, with her family attending. Memorial donations can be made to the Peoria Rescue Ministries, P.O. Box 837, Peoria, IL 61652. You may view Martha’s obituary online at www.woolsey-wilton.com.
See more See Less

In Memory Of Martha Ann Allovio