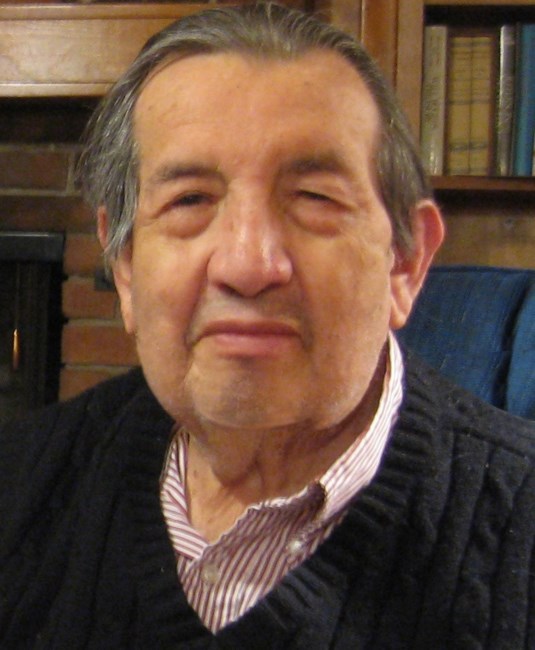 Carlos A. Córdova Galarza, 90, of Perrysburg, passed away Monday, August 27, 2012, at Hospice of Northwest Ohio surrounded by his family. He was born on January 10, 1922, in Cuenca, Ecuador to Andres F. Córdova, the former President of Ecuador, and Rosario Galarza. He came to the USA in 1941 as a foreign exchange student at Bowling Green State University where he met and later married Constance Zachman Córdova on March 1, 1944, during World War II. Carlos obtained a Law Degree after the war, graduating from The University of Toledo College of Law; he practiced law in Perrysburg for over 40 years. Carlos was a World War II Veteran and landed in Omaha Beach, Normandy, France, D-Day, June 6, 1944. He was inducted in the army in 1943 at the age of 22 as a rifleman in the First Infantry Division, “Big Red 1”. He was one of six men in a platoon of 45 men who survived. He was a recipient of The Purple Heart for receiving two bullets to the head in World War II in Aachen, Germany Oct. 18, 1944. Carlos was an advocate for senior citizens; he founded Elm House in 1964 and Louisiana House in 1976. Carlos was the 1989 recipient of the International Institute’s “Key to the Golden Door” the award for Chairman of the Citizen’s Advisory Committee of TMACOG, on Housing Committee of the Council of Governments, and housing for the elderly in Perrysburg. Carlos served on other local and regional boards including The Area Office on Aging, Wood County Committee on Aging, WSOS, Community Action Center, and Community Planning Council. Carlos was the President of Perrysburg City Council in the 1950s; Chairman of the commission that wrote the Charter for Perrysburg in the 1960’s which was later adopted by the City of Sylvania. He advocated for city water and street lights for Perrysburg Heights; worked on a master plan to handle growth of the city, the first sewage treatment plant, established the municipal court in Perrysburg to serve the northern half of Wood County. Later in the 1960’s he began as Acting Judge at Perrysburg Courts. As the Chairman of the Wood County Democratic Party he served as a delegate for the state of Ohio to the Presidential Election for John F. Kennedy in 1960 and Lyndon Johnson in 1964, where he was a member of the electoral college. In 2009 he was the recipient of the “Virginia Stanahan Award” from the Perrysburg League of Women Voters for his service to the community and called one of Perrysburg’s “founding fathers”. He is survived by his sisters Lucrecia (Juan) Neustatter, Victoria Sandoval, Rosario Córdova, and Matilde Córdova, all of Quito, Ecuador; and children, Carlos “Andy” Córdova, Campbell, CA, Carmen (Michael Daly), Córdova, Bexley, OH, Cristina Córdova, Perrysburg, OH, Cecilia (Jay) Richardson, Perrysburg, OH, and Colette (Stephen Phillips) Córdova , Toledo, OH.; grandchildren, Michelle Córdova, San Jose, CA, Christopher (Suzanne) Córdova, St. John’s , New Foundland, Canada, Dushan Petrovich, New Haven, CT, Urosh Petrovich, Bexley, OH, Audrey Richardson, Washington, D.C., Tyler (Meagan) Richardson, Hillard, OH, Clay (Allison Mirkin) Córdova, Cambridge, MA, Chad Córdova, Princeton, NJ; great-grandchild Adeline Córdova St. John’s , New Foundland, Canada,. He was preceded in death by his wife Constance Z. Córdova and his parents; brothers, Dr. Manuel Córdova, Dr. Jorge Córdova, Dr. Gonzalo Córdova, and Andres Córdova; sisters, Maria Córdova and; son, Colin Córdova. Friends will be received on September 6, 2012 from 5:00 PM- 8:00 PM in the Witzler-Shank Funeral Home, 222 E.S. Boundary St., Perrysburg, Ohio 419-874-3133. Carlos’s life will be celebrated at a memorial service beginning at 11 AM on Friday, September 7, 2012, at Witzler-Shank with the family officiating. A military burial will be at Fort Meig’s Cemetery, Perrysburg following the memorial service. Expressions of sympathy may take the form of donations to the American Civil Liberties Union, Alzheimer’s Association, Wood County Committee on Aging or the Honor Flight of Northwest Ohio. Condolences may be made to the family at www.witzlershankfuneralhome.com.
See more See Less

In Memory Of Carlos A Cordova