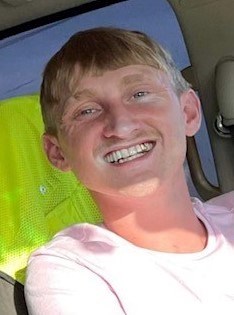 Andrew Christopher Cox (aka Andy the kid), age 22, of Hutto, Texas tragically passed away on Christmas night. Andrew was born January 26, 1999. He is survived by his loving parents Jeremy and Sheila Cox. His brothers Zachary Cox and Bailey Cox and his sisters Shelby Mowry (spouse Daniel), Bobbi Clark (spouse Mike), and Tray Christien Jarman (spouse Kip). He had nine nieces and nephews and many aunts and uncles. Andy was also survived by his loving great-grandparents, D.R. and Lois Stevens of Ada, Oklahoma and his grandmother Lorene Smith, of Pflugerville, Texas. He was preceded in death by his grandfather Ernest Smith and his loving Mimi, Jean Tirey. Andy also leaves behind his fur babies, Nas and Kisses, who were his devoted Dobermann’s. Andy was ambitious. At just 22, he owned and operated his own company, KHDD Underground. Andy never met a stranger, he talked to everyone and made them feel like family. He would give the shirt off his back to help anyone in need. He had the biggest smile and the biggest heart and will forever be truly missed. A visitation for Andrew will be held Tuesday, January 4, 2022 from 6:00 p.m. to 8:00 p.m. at Cook-Walden/Capital Parks Funeral Home, 14501 North Interstate 35, Pflugerville, TX 78660. Funeral services and interment will occur Wednesday, January 5, 2022 at 2:00 p.m. at Immanuel Lutheran Church, 500 Immanuel Road, Pflugerville, TX 78660. A reception will occur after the service at the church as well.
See more See Less