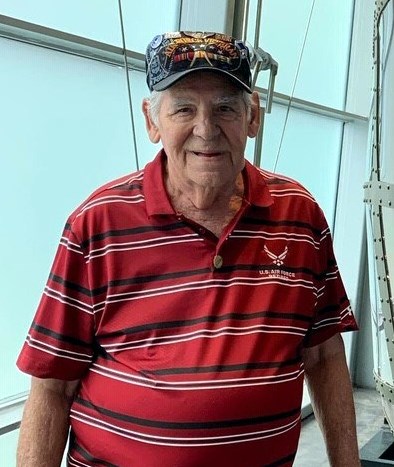 Master Sergeant Edward Row Chapman (Air Force Ret.), age 81, passed away on Easter Sunday, April 12, 2020 at St. David’s Hospital in Austin, Texas. Ed was a decorated veteran who served in the Vietnam War and spent a total of 23 years in the U.S. Air Force on active duty. Ed Chapman was born on November 16, 1938, in Des Moines, IA. When he was 18, he decided he wanted to join the Air Force and was stationed at Amarillo AFB in Amarillo, Texas. He would go on to serve in the Vietnam War in Da Nang Air Base. After serving in Vietnam, he spent time abroad in Europe and the Far East. After returning to Bergstrom AFB in Austin, Texas, Ed met and fell for Marcy Thompson. They married on December 17, 1977. Ed retired from the Air Force in 1979. He completed his college work and obtained a degree in accounting. He worked for Lockheed for 10 years helping design and build new weapons. Ed started working with his brother-in-law in Colorado for several years as Air Force contractors. When he wasn’t working, Ed and Marcy had a passion for their home and yard and kept it meticulous. They also had an RV in which they enjoyed traveling to different parts of the US – Florida, South Carolina, and Colorado to visit friends and family. Ed also had a 2001 white Mustang that he enjoyed. He was recently diagnosed with stage 4 lung cancer and succumbed to multiple complications that were related to the lung cancer shortly after his third chemo treatment. Ed was an accomplished accountant, a loving step-father, grandfather, and a brave and honorable soldier. He is survived by his wife, Marcy; his step-children, Rick Thompson and Sherry Ries; and several grandchildren and great grandchildren. Due to COVID-19, Ed was buried on Thursday, April 16, 2020, with just family present. There will be a military memorial service held at Cook-Walden/Capital Parks Funeral Home on Thursday, June 4, 2020 at 11:00 a.m. and all are welcome. The Chapman/Thompson families welcome all stories, photos, and memories that Ed’s friends and colleagues would like to offer. Whoever would like can meet at the gravesite after the service. Flowers are welcome at Cook-Walden/Capital Parks Funeral Home, 14501 North Interstate 35, Pflugerville, Texas 78660. Ed would have liked donations to be made to any local Vietnam War Memorial.
See more See Less

In Memory Of Edward Row Chapman