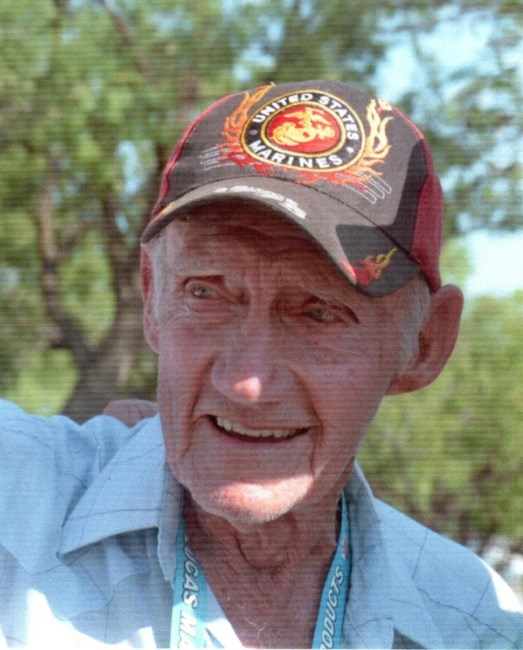 Jack Howell died peacefully on June 8, 2021 in Austin at the age of 96. He was born in Coolidge, Texas on April 8, 1925 to U.D. and Turzie (Mills) Howell. Jack enlisted in the Marine Corps in July 1943 and was a Marine Air Corps aviator. The aircraft was the SDB Dauntless dive bomber. His group was assigned to protect various islands with the Philippines Island chain. Jack was awarded the following for his service: Distinguished Flying Cross, Air Medal, American Campaign Medal, Asiatic Pacific Campaign Medal, World War II Victory Medal and the Honorable Discharge Button. Jack married Kathleen Belshan Fuller in 1965. They purchased a ranch in Dripping Springs where they raised and bred registered quarter horses until 1990. They sold the DS ranch and purchased 40 acres in Poncha Springs, Colorado. They built a three-story log home, where they spent the summer months and would return to Austin for the winter. As soon as the snow began to melt in Colorado, they would pack up and return to their home on the mountain. Jack's passion in the '60s and '70s was drag boat racing. He and Kathleen raced in Texas and other states and won over 90 races. They had racer friends all over Texas and multiple other states. He is an original member of the Southern Drag Boat Association. Jack is preceded in death by his parents; his wife, Kathleen; and sister, Bobbie Bruton. He is survived by his son, Jack W. Howell and wife, Billie; son, Jim Howell and wife, Kathy; grandchildren, Kelly Strange and husband Matt; Jeff Howell and wife, Rachel; Jay Dustin Howell; and Kristina Faias; great-grandchildren, Alexandra, Molly, Jordan, Jaden, Nathan, Jordan and Garrett; sisters, Clarita Hayes and Beth Johnson; and several nieces and nephews. Since 2017, Jack lived at Ledgestone Memory Care. Our family deeply appreciates the love and care given to him while he was there. He was a quiet and honorable man. It was hard to get him to smile for pictures sometime. His happiest times were 45 years married to Kathleen. She was the love of his life and we are sure he is smiling at her now.
See more See Less

In Memory Of Jack Howell