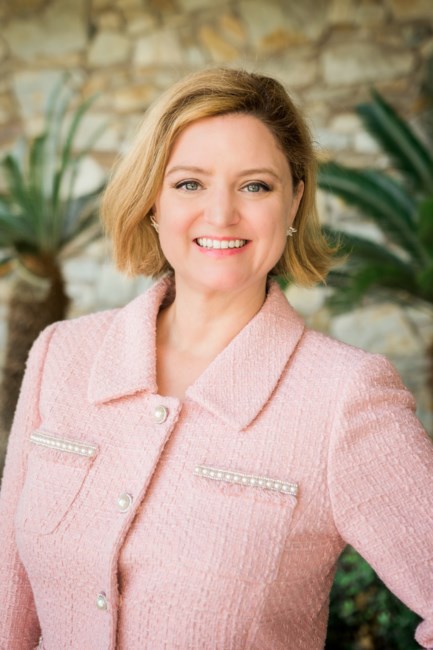 Allister Adel DeNitto was a dedicated and beloved mother, wife, daughter, friend, and public servant. She was a trailblazer, deeply devoted to our community, unwavering in her commitment to ensuring fairness and justice. Born on November 10, 1976, in Dallas, Texas, Allister was raised close to her family, especially her father and grandfather, whom she absolutely adored. As a child, they often visited South Padre Island, and she loved returning there as an adult with her own family. Allister married David in 2002. The couple looked forward to celebrating their twentieth anniversary later this month. Together they have two incredible sons, who were the light of Allister’s life. She was so incredibly proud of them both, and being their mother brought her immeasurable pride and joy. She could often be heard extolling all their wonderful qualities and accomplishments to family, friends, and colleagues. Allister was brilliant and kind – with a razor-sharp wit and excellent sense of humor. She loved to laugh and reveled in playing quirky pranks on her family and friends, such as “flocking” her friends’ houses with flamingos on their birthdays. She was a loyal friend, notorious for putting the needs of others first. She was always willing to lend a helpful hand and support when needed, never asking for anything in return. Allister attended college at the University of Arizona for her undergraduate studies. She went on to attend the Sandra Day O’Connor College of Law at Arizona State University to pursue her dream of becoming a prosecutor. Taking advantage of everything law school had to offer, she volunteered as a Victim Advocate, participated in moot court competitions, and took as many courses as she could with her favorite professor, the late Professor Michael Berch. Allister was loved and respected by her fellow students for her humor, wit, and intelligence. She was named valedictorian of the graduating class of 2004. Allister was a devoted public servant, dedicated to improving the lives of those around her. She began her legal career at the Maricopa County Attorney’s Office, where she was an award-winning felony prosecutor and tirelessly advocated for victims’ rights. During her tenure as Deputy County Attorney, she served in the Vehicular Crimes, Gang, and Drug Enforcement bureaus. Allister also served as the Chief Administrative Law Judge for the Arizona Department of Transportation. Later she was appointed General Counsel for the Arizona Department of Child Safety, where she worked to protect our state’s most vulnerable. Her dedication to protecting and serving children was her passion and top priority throughout her distinguished career. She also proudly served as the Executive Director of the Maricopa County Bar Association and Maricopa County Bar Foundation for two years. Allister made history when she was appointed to the position of Maricopa County Attorney in October of 2019, shattering the glass ceiling as the first woman in Arizona history to hold the title. She described this esteemed appointment as her “dream job.” She later went on to become the first woman elected to serve as Maricopa County Attorney in 2020. Allister always encouraged her colleagues and those around her to seek equal justice for the community she treasured, and to be committed to doing the right things for the right reasons, every day. In addition to her demanding career, Allister was dedicated to philanthropy and service to community. She often recognized becoming a Rotarian as one of her most profound and formative experiences. From 2017-2018, she served as President of Phoenix Rotary 100 where she raised funds to support organizations on the forefront of fighting human trafficking. She also worked with the City of Phoenix to fund a fellowship area and butterfly garden at Starfish Place, a transitional housing facility for trafficking survivors and their families. Allister passed away on April 30, 2022. She is survived by her husband, David, her two beautiful sons, and her father, John Adel. She will remain in her family’s and her friends’ hearts forever. Her legacy of service and justice is an inspiration to all. Services are scheduled for Monday, May 9, 2022, at St. Francis Xavier Catholic Church: Time: 2:00 p.m. Location: 4715 N Central Ave, Phoenix, AZ 85012. Donations may be made to Phoenix Rotary 100 in Allister’s memory at https://rotary100.org
See more See Less

In Memory Of Allister Adel DeNitto