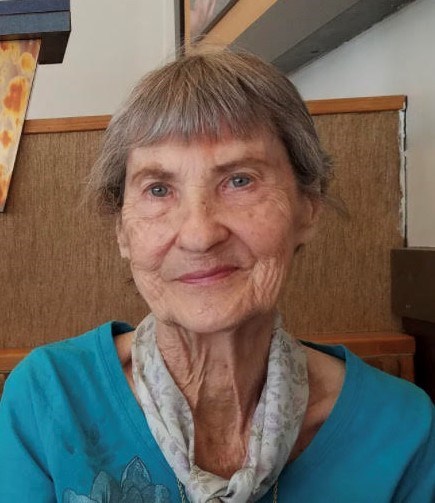 Joan “Joanie” Ann Guy went home to Jesus on January 14,2023 at the age of 90 at home in Goodyear, Arizona. Joanie was born the youngest of thirteen children to Hazel and Frank Hackett on September 16,1932 in Batavia, New York. As a child, she grew up on a farm and had many loving stories of her childhood with her siblings. Joanie married George Giambrone Guy on June 11,1955 and had five children, Dean, Rona, Maria, Darin and Dawn. In 1972, they moved their family to Phoenix, Arizona. In addition to being a loving mother, Joanie enjoyed sewing, the outdoors and traveling. She was a good baker and made delicious pies. Joanie joins her parents, Frank and Hazel, her brothers, Paul, Vincent, Millard, Eugene, David, Walter and James, her sisters, Ruth, Myra, Hazel and Patricia, her husband, George and son, Dean. She is survived by her brother, Francis, her children, Rona Simmons (Mark), Maria Cordray, Darin Guy and Dawn Vetter (Barry), her grandchildren, Brandy, Bobby, Joshua, Branden and Bria, her great grandchildren, Capri, Aubrey, Kayden and Connor. Now that Joanie has passed into the arms of our Lord, we should remind ourselves that while this is the end of her physical life on Earth, it’s the beginning of an eternal and beautiful journey in Heaven. Exodus 23:20 See, I am sending an angel ahead of you to guard you along the way and bring you to the place I have prepared. Joanie will be laid to rest with her husband, George at the National Memorial Cemetery of Arizona. The graveside service will be private for family members and close friends present.
See more See Less

In Memory Of Joan Ann Guy