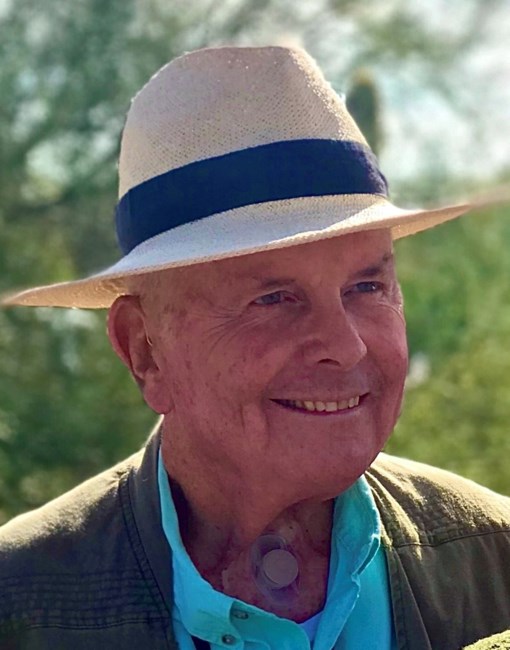 John Scott Kerr passed away peacefully at his home in Scottsdale, AZ on July 5, 2020 surrounded by his loving wife and “forever buddy”, Bonnie (Lynn Jennings) and faithful friend, his golden retriever, Samson. John was two days shy of his 77th birthday. John was born on July 7, 1943 in Washington, DC and lived briefly in Atlanta, GA before settling in Short Hills, NJ with his family at the age of 3 where he lived until he was married. He attended high school at the Pingry School, Elizabeth, NJ, graduating in 1961. John received his undergrad degree from Kenyon College, Gambier, OH, in 1965 and his Master's Degree from The Breadloaf School of English, Middlebury, VT, in 1972. He became a Certified Financial Planner from the College for Financial Planning in 1996. During his high school and college years he was very active in sports; particularly, football, wrestling, and track and field. It was while attending Kenyon College that he met his future wife, Bonnie. They were married on August 14, 1965 and would have been celebrating their 55th anniversary this year. After graduating from Kenyon College, he and Bonnie moved to CT where John taught English at the Taft School, Watertown, CT, for two years. He then enlisted in the U.S. Army where he served until June 1970 as a Staff Sergeant E6. John was an Area Intelligence Specialist in Da Lat, Vietnam for one year during his service to our country. While in Vietnam, he taught English as a second language to many Vietnamese, several whom he knew quite well and was instrumental in their coming to live in the U.S. He has maintained relationships with them to this day. After serving in the Army, he and Bonnie began a long career at the Kent School, Kent, CT. He held many positions while at Kent; including, English teacher, Director of Admissions, Director of Planned Giving, Senior Development Officer and Asst. Secretary of the Corporation. In addition, he coached Varsity Wrestling for several years. John retired from Kent School in 2009 after 39 years. While living in CT, John pursued his love of singing and was a member of a classical singing group and Barbershop chorus. John and Bonnie left CT and retired to Southport, NC in 2009 where they enjoyed coastal living. He was an active member of St. Philip's Episcopal Church. While in NC, John took up water color painting at the Franklin Gallery. He was quite successful, had several shows, won many awards, and sold many originals both in NC and in Canada. In 1972, John and Bonnie bought property in South Harbour, Cape Breton, Nova Scotia, where subsequently, over the next 12 summers they built a round silo home which was featured in Fine Home Building Magazine in the February/March 1988 issue. John always had a love for woodworking and built and restored many pieces of furniture over the years, but this was his first and only attempt at homebuilding! He and Bonnie spent every summer in Cape Breton for 46 years. John battled thyroid cancer for 12 years after being diagnosed in 2008. He underwent a total laryngectomy at the Duke University Medical Center in 2015. As his disease progressed, he and Bonnie chose to move to Scottsdale, AZ where he could receive treatment at the Mayo Clinic and where they could also be closer to family. Besides his wife, Bonnie, John leaves a sister-in-law, Peggy O'Rourke, wife of Brian, Cave Creek, AZ, a nephew, Michael Roberts and his wife, Mandie, and two great-nieces, Kenzie and Delaney, Anthem, AZ and a niece, Carla Roberts and her partner, Stacie Kortz, Claremore, OK. He was preceded in death by his parents, one sister and one brother. John also leaves his beloved furbaby, Samson, and will be welcomed by many others at the Rainbow Bridge. Celebration of Life plans are curently pending. In lieu of flowers, Bonnie requests that you send monetary contributions in John's memory to either: The Grayhawk Classic Residents' Foundation (a scholarship fund for the Vi at Grayhawk employees pursuing higher education) 7501 E Thompson Peak Parkway, Box 100 Scottsdale, AZ 85255 or Desert Voices Laryngectomy Support Group c/o Prostrollo 7375 E San Alfredo Dr. Scottsdale, AZ 85258 These two organizations were very near and dear to John and he would sincerely appreciate your contributions to either one of them.
See more See Less

In Memory Of John Scott Kerr