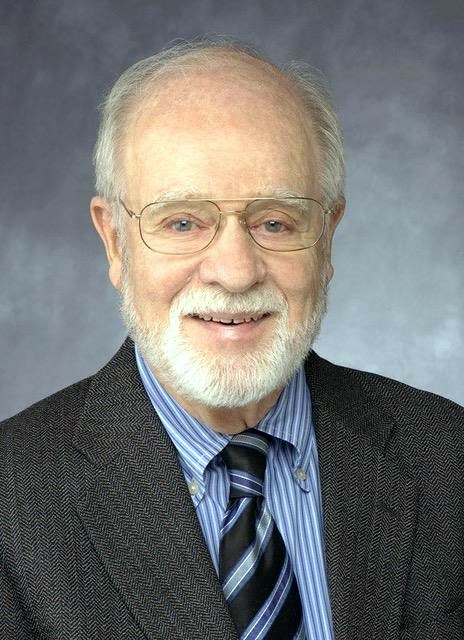 Philip Alan Robbins passed away peacefully at home in Phoenix, Arizona on the evening of March 20, 2018, after a short illness. He was born on August 2, 1932, to Catharine Elizabeth (Veach) Robbins and Harold Robbins in Greencastle, Indiana. On Phil’s 5th birthday, he traveled with an aunt by train from Indiana to Arizona to join his mother, father and younger sister, Marian, after the family relocated for his father’s health. He grew up in Tucson; the “Old Pueblo” and the Arizona Wildcats have always held a special place in Phil’s heart. He graduated with a bachelor’s degree in 1955, and completed his JD in 1956 at the University of Arizona College of Law. After clerking for a U.S. District Court judge in Los Angeles, Phil’s first job as a trial lawyer was in San Diego, California, as an Assistant District Attorney, where he remembered prosecuting the only horse-stealing case in San Diego in a century. Phil moved home to Arizona with his wife and young family in 1958, after he accepted a position at the firm of Moore and Romley. In 1973, he founded, with several colleagues, the firm of Robbins, Green, O’Grady and Abbuhl, which flourished as a well-respected legal presence in Arizona over the next 33 years. Phil then spent three years as Special Counsel to Jennings, Strouss and Salmon, and served as Special Counsel to Sandweg and Ager, P.C., from 2008 until his retirement in 2017. Recently, his practice included domestic and international arbitration and mediation, although for the majority of his career he was a trial lawyer, litigating commercial disputes, antitrust cases, and torts. He was a mentor to many young professionals, demonstrating legal skills, and communicating the importance of professional respect, civility and perseverance. Over the decades, Phil held membership and leadership roles in many law-related, business and cross-border organizations, including: Fellow of the American College of Trial Lawyers; and Diplomate in the American Board of Trial Advocates, where he also received the Professionalism Award. He was inducted into the Maricopa County Bar Association Hall of Fame in 2010; was the Past Chair of the State Bar of Arizona International Law Section; and was Past President of the Arizona Trial Lawyers Association. He enjoyed a long-time affiliation with the American Inns of Court. His international affiliations included serving as Chair of the Board of Directors of the National Law Center for Inter-American Free Trade; Past Chair of the U.S.-Mexico Bar Association; Past President of the Arizona-Mexico Commission; Past President of the Phoenix Sister Cities Commission; and Past President of the Border Health Foundation. He was a member of the Phoenix Committee on Foreign Relations and the NAFTA Advisory Committee on the Use of Mediation and Arbitration in Private Commercial Disputes. He was a member of the Arizona Supreme Court's Arizona-Sonora Judicial Cooperation Project, and an observer delegate with the UNCITRAL Working Group on Model Arbitration Law. One of his most treasured experiences was serving as an election observer with former President Jimmy Carter in Indonesia and Honduras. He was a faithful member and Past President of the Arizona Business Alliance for over 30 years. He was a delegate to a White House Conference on Small Business, a former Board Member of the Phoenix Opportunities Industrialization Center, was a member of the University College of Law Board of Visitors. Up until his death, he was a member of the Executive Board of Vote Smart-Facts Matter. Phil had a passion for travel, once stating his interest in travel was piqued by Richard Haliburton’s Book of Marvels, a childhood gift from his parents. He traveled all over the world, and once noted: “If you go as a traveler and not a tourist, there are really no disappointing places, even the ugly ones with bad food and lousy weather.” He loved the outdoors, and hiking was a delight to him, from Arizona to the Andes in Peru and beyond. Phil loved the study of language, especially Spanish. He discovered a Latin cultural oasis in Phoenix at Interlingua, where he participated in the center activities and Spanish classes until he became ill in February. Phil was a life-long lover of opera and theatre. He admired all great and honest art. He was looking forward to further developing his skills as a painter; his art studio at home was nearly complete. He had a keen interest in politics, and understood well the importance of good governance in a free society. His intellect, humor, insights, wisdom, patience and steadfastness will be greatly missed by many. Phil was predeceased by his parents, and by his daughter Melanie Robbins. He is survived by his loving and beloved wife, Carolyn; his daughters Jennifer Robbins, Phylis Robbins, Susan Robbins (Tammy Perkins), Melanie Davis, and Lauri Jordan (Laura Somerville); by his sister, Marian Kohl; by his first wife, Mary Stewart Robbins; by his nephew Brad Kohl and niece Barbara Kohl and their father John Kohl; and many other relatives, dear friends and colleagues. A Celebration of Life service will take place Saturday, April 14, 2018 at 2:00pm at Orangewood Presbyterian Church, 7321 N. 10th St. Phoenix, AZ 85020. Please visit www.almoore-grimshaw.com to leave condolence messages for the family. In lieu of flowers, please consider making a donation to the "Vote Smart-Facts Matter" organization (www.votesmart.org) or a charity of your choice.
See more See Less

In Memory Of Philip Alan Robbins