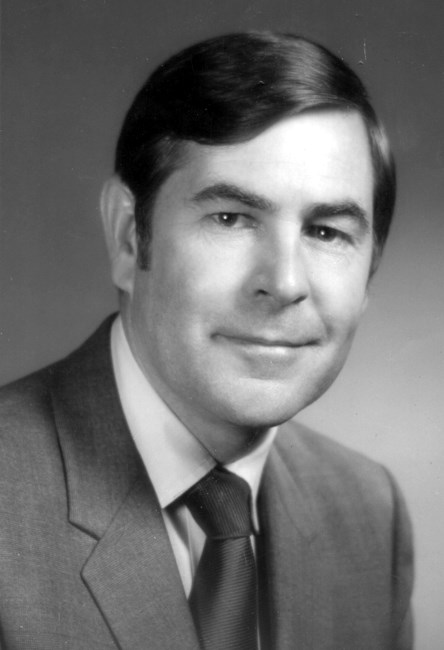 William Edward Wilson passed away on October 7, 2018. He was born in Wewoka, Oklahoma April 19, 1931 to William and Mabel Wilson. He was the youngest of six children with four brothers and one sister. The family moved to Arizona when he was 14. Bill finished high school at Phoenix Union High School. His four brothers entered military but Bill could not because he provided the livelihood of his widowed mother. Bill initially went to work for Sunkist Orange and then went to Schnorr making furniture and mattresses. Bill met JoeAnn (Howell) Wilson and her friends at a skating rink, where she introduced herself to him. Bill and JoeAnn were married December 10, 1951. Shortly afterward Bill started at Mountain Bell Phone Company for $37.50 a week. He worked there for 31 years ending his service as a District Manager. Bill graduated with two degrees from Arizona State University and was very active with the ASU Alumni Association. He was a Director of Delta Sigma PI business fraternity, and founded the chapter at Northern Arizona University. He was also a member of the Sun Angels, and a leader of the On Deck Circle supporting ASU baseball. He was very active in the Telephone Pioneers and was awarded their highest honor with the Timothy award. Following his retirement he founded the Arizona Phone Pholks, a group of telephone RV enthusiasts who traveled all around the country for over 21 years. Bill headed the largest international Phone Pholks rally in which he brought 551 RV families to Flagstaff. The members of the group set up electricity, water and sewer for the entire camp, painted the restrooms and left all the facilities for the Flagstaff fairgrounds, where they continue to be used today. Bill was chosen by the phone company retirees to represent them at an AT&T stockholders meeting. Bill wrote a letter to Jack McAllister, the president of AT&T. To everyone’s surprise, Jack called him and invited him to speak for five minutes. When Bill started making too many impressive points, Jack tried to cut him off, to which Bill replied, “Jack you gave me five minutes and I’m gonna use them!” This helped save many retiree benefits at the time. Bill had his hand in many areas and activities of the community. He was part of a task force sent by Arizona’s Governor to New York City to study the urban village concept and its possible use to combat urban sprawl. He helped reseed after the Dude fire in Payson. He and the telephone pioneers built a major wheelchair accessible sidewalk. He was part of a group of retirees that would do handyman tasks for needy retirees. He volunteered to help build part of the Science Museum. Bill enjoyed playing his guitar and singing at many family and friend gatherings. He also loved working outdoors, especially in his front and back yards. Throughout their 66 years, Bill and JoeAnn enjoyed traveling. They saw most of the United States and visited six continents. Their travel highlights included walking on The Great Wall, uncovering the treasures of St. Petersburg, exploring of Versailles, and touring nearly all parts of Europe. Bill had two children, the late Carol A. Wilson and son Robert (Bob) E. Wilson. He is survived by his beloved wife JoeAnn and son Bob. A Celebration Of Life will be held at Phoenix Memorial & Park Cemetery, 200 W Beardsley, Monday, October 15 with visitation 9:30-11 am, Service at 11am, graveside following. Reception will follow at Horizons Community Church, 14120 N. 79th Ave, Peoria, AZ, 85381.
See more See Less

In Memory Of William E Wilson