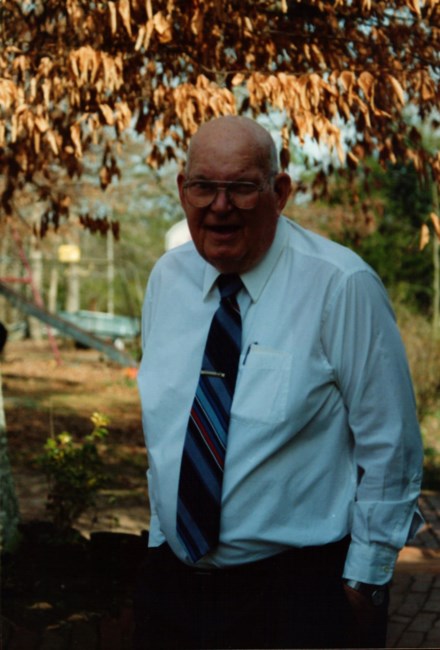 Reverend Billy Ray Wilson, 89, of Pickens, South Carolina, born March 24, 1930 went to be with his Lord on October 5, 2019. Born in Central, South Carolina, he was the son of the late Edgar Eugene Wilson and Mattie Elrod Wilson. Reverend Wilson served a number of Wesleyan Churches in the Pickens, Oconee and Anderson areas including: Mount Calvary Wesleyan in Easley, Fellowship Wesleyan in Iva, Keowee Wesleyan in Seneca, Pelzer Wesleyan in Pelzer, Arial Wesleyan in Easley, Anderson Wesleyan in Anderson and last served Smith Chapel in Liberty before his retirement. He was happy to serve people in his role as minister and he affected many lives. He continued to be a vigilant prayer warrior for his Lord throughout his life. Billy Ray loved his grandchildren and his cornbread and milk and pinto beans. He was known by family to always be working on a project building things and telling tales of his childhood growing up. Reverend Wilson’s grandfather, John Elrod, co-founded Central Wesleyan on his front porch which is better known today as Southern Wesleyan University. Reverend Wilson leaves behind his wife of 69 years Virginia Morgan Wilson. He was affectionately known to her as “Bill”. Billy Ray leaves behind his son Gene Wilson (Diane) of Six Mile, two daughters Faith Culbertson (Ken) of Piedmont, Becky Pitts (Roy) of Taylors, and a sister Genevieve Fowler of Liberty. Reverend Wilson’s extended family includes 6 loving grandchildren and 10 adorable and precious great-grands. He is predeceased by 6 sisters and 4 brothers. A service will be held at the Dillard Funeral Home Chapel, at 2:00 PM on Tuesday, October 8, 2019 with a visitation being Monday evening, October 7, 2019 from 5:30 PM to 7:00 PM. Interment will follow the funeral service on Tuesday at Hillcrest Memorial Park. Flowers are accepted or donations to the Pickens View Wesleyan Church building fund, 744 Bethlehem Ridge Road, Pickens, SC 29671. Online Condolences may be sent to www.dillardfunerals.com Dillard Funeral Home is assisting the Wilson family.
See more See Less

In Memory Of BILLY R WILSON