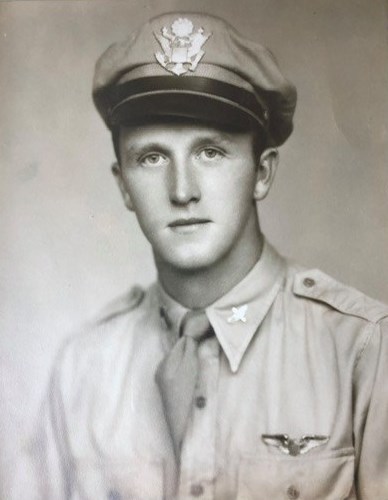 Edward A Herbert Jr., age 101, of Pittsburgh, Pennsylvania passed away on Monday, May 9, 2022. Ed was born October 1, 1920, to the late Edward A. Herbert Sr. and Irene (Moorhead) Herbert. He was the loving husband to: Dolores Foley Herbert (passed away 1977) and the late Virginia Ewart Herbert (passed away 2010). He was pre-deceased by brother Jack Herbert Sr and sister Lois “Dolly” Herbert Getz. Ed was raised in: Homestead, Pa. where his father owned a drugstore, and in Wilkinsburg, Pa. where he played basketball for the Wilkinsburg Tigers. In World War II he served in the Air Force as a pilot of the B-17 Flying Fortress. He had a career as Air Traffic Controller working out of the Pittsburgh Airport and later out of Oberlin, Ohio. He also resided in Penn Hills Pa., Boynton Beach FL (where he exercised with ocean swimming), Murrysville Pa. and Allison Park Pa. He was an avid golfer. He is survived by daughter Leslie Herbert Scheurer (Joe), stepdaughter Carol Eversole McMillan (Randall), and stepson Stephen Eversole (Lydia). Grandchildren: Monica Scheurer Jenkins (Jim), Theresa Eversole Adams (Joshua), Kelly Eversole Herman (Todd), Alexander McMillan and Jordan McMillan McGowan (Nicholas) and 10 great-grandchildren. Nephew Jack Herbert Jr (Lynn) of Plum Twp and nieces Paula and Lori Getz. Gifts in his memory may be made to his favorite charity: Little Sisters of the Poor, 1028 Benton Ave Pittsburgh, PA 15212. www.littlesistersofthepoorpittsburgh.org Donations can also be made to: www.alz.org Edward will be laid to rest with full military honors at The Cemeteries of The Alleghenies on June 6, 2022, at 10AM
See more See Less

In Memory Of Edward A Herbert Jr.

National Cemetery Of The Alleghenies