Given the exceptional situation we are currently experiencing, due to a pandemic, it is still possible to receive condolences at the funeral home, but under the respect of the recommendations of the government, which are as follow:

- Only 50 people are allowed at a time in the building;
- Respect the 2 meters of social distancing at all times;
- Respect the hygiene instructions (hand washing);
- Wearing a mask is mandatory;
- No one who has traveled in the past few weeks be present;
- No one with a symptom of COVID-19 be present. 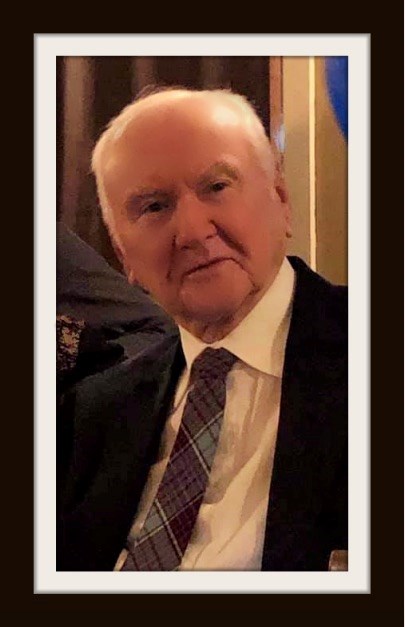 John Valentine Evans (91) – It is with profound sadness that we announce the passing of John V. Evans on November 23, 2021, at the age of 91. John fought a long and valiant battle against cancer with dignity, strength, and humour, protecting his loved ones from his suffering to the end.

Born in Montreal in 1930, John was the youngest of 8 children (Marcella Duch (m.) Peter Iwaskiewicz (f.)) who have all preceded him.

John followed in his brothers’ footsteps and joined the military in 1953, serving in the Canadian Armed Forces for twenty years, retiring on his birthday on February 14, 1974. During his career, he moved his family to several places across Canada (Chatham NB, Sept-Iles QC, Sioux Lookout ON, Cold Lake AB, Bagotville QC, Peterborough ON, & Chateauguay QC. In their retirement, John and Lise spent several years in Comox BC until they settled back in the Montreal area, first in Châteauguay and then finally in Pointe-Claire village. He will be missed by his many neighbours at the Royal Lanthier, where his chair in the lobby sits empty, no longer present to chat with all who passed through, regaling them with his witty conversation and unique anecdotes about life.

John was passionate about many things during his life, which included his unfailing dedication to the Catholic faith. He was an active man throughout his years, enjoying many sports including tennis, skating, skiing, and golf and always encouraged and supported his children to do the same. He was an avid walker and loved being outdoors. John had a great appreciation for the arts; singing and acting himself during his involvement in local theatre guilds. John will be most remembered for his love and dedication to his family, his religious faith, infectious smile, quick humorous wit, and enjoyment of music and dancing. He never missed an opportunity to take a spin on the dance floor, and we know he will be dancing in heaven as he watches over us.

In lieu of flowers, please consider a donation to the Canadian Cancer Society or a charity of your choice.

In Memory Of John Valentine Evans