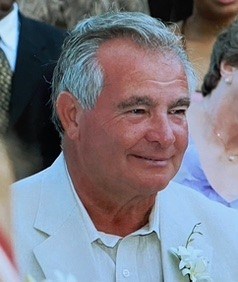 It is with heavy hearts that we announce the passing of Gemino A. Freda, a.k.a. James, Jim, Jimmy, Papa, Grandpa, Pop-pop, “the Don”. He left us after years of hard fought battles with various health issues. He was preceded in death by his father and mother, Alberto and Chiara Freda, and his three brothers: Giovanni, Orlando, and Domenick, and two of his sisters: Domenica and Anna Maria. He left behind his loving wife, Susan (nee Picarelli), his sister, Margherita Scheidet (Tom), his children, Billy (Trish), Dale Drissel (Joe), Kristin Sorell (Peter), and James (Kristy), and his grandchildren, Peter, Christian, Jack, Ryan, Ben, Hailey, Sarah, Max, Joseph, and Ali, along with countless numbers of loving family members, in-laws and friends. Born in Abruzzo, Italy on May 12, 1942, Gemino immigrated to the USA in May of 1953 on the SS Andrea Doria. He spent his teen years attending school in Westbury, NY while learning English as a second language. He enlisted in the US Air Force in 1963 and served as an aircraft maintenance specialist on F-102 aircrafts and as a metalworker. After the Air Force, he became a proud member of the Operating Engineers Union on Long Island while also venturing into the building, maintaining, and running of various, pubs, restaurants and even a hotel, marina, and conference center. Now, better known as Jim, it is impossible to recount all of his adventures, set backs, triumphs, battles, antics, golf endeavors and exploits, as well as, all the relationship bonds he fostered with others; however, it can be said for certain that he positively impacted a myriad of lives and was dear to all who knew him. Reposing at O.B. Davis Funeral Homes, 4849 Nesconset Highway, Port Jefferson Station, NY 11776. Visitation will be held on Wednesday September 28, 2022 from 2-4 and 7-9 PM. Funeral mass on Thursday, September 29, 2022 at 9:45 AM at Infant Jesus RC Church, 110 Myrtle Avenue, Port Jefferson, NY 11777. Interment to follow at Calverton National Cemetery. In lieu of flowers, donations may be made to any charities benefitting cancer or stroke research. Fond memories and expressions of sympathy may be shared at www.obdavisportjefferson.com for the Freda family.
See more See Less