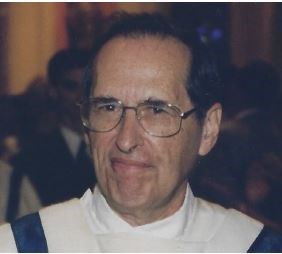 Deacon David Bloom passed away peacefully at his home on July 27, 2022 after a long illness. Deacon Dave was born in the Bronx, New York, the son of the late Benjamin Bloom and Dora Cohen. He had one brother, Harry Bloom. David was an accountant, by profession, but as a young man in New York, David tried his hands at various jobs, such as a photographer, a disc jockey and a ballroom dance instructor. It was when he was teaching ballroom dancing that he met his future wife, Virginia, who was taking lessons for the upcoming wedding of a friend. They were married on April 8, 1971 in Sacred Heart Church in the Bronx, New York. While living in the Bronx, they welcomed two of their three children, Theresa and Stephen. The warmer temperatures lured the young couple to Florida, where David’s brother Harry was living. So they packed up the car and took the AutoTrain, arriving in Florida on July 9, 1976. The young family took up residence in Fort Lauderdale and welcomed their third child, Dori-Ann, shortly afterwards. David worked as an accountant for a wholesale sprinkler firm for over twenty-five years, but it was just a job. His family was his life. He worked tirelessly to provide his three children with a Catholic education. David was born and raised in the Jewish tradition. In 1982, a new parish was formed to serve the area in which he lived, Sunrise, Florida. The Blooms excitedly joined All Saints and made many life-long friends. As the old saying goes: “If you can’t beat ‘em, join ‘em”. And David did! He converted to Catholicism in February, 1983. All Saints kept him very busy as a participant in many Church function and ministries. He served as an usher, a lector, Eucharistic Minister, Bible Study coordinator and attended prayer groups. David’s enthusiasm for service led his pastor, Father Tony, to ask him to pray about the diaconate. Which he did for the longest time! David was ordained as a deacon on November 20, 1999. He often said that “the diaconate is where God is sending me”. David kept a busy schedule of service at All Saints, until 2006 when he moved to Port St Lucie to be near his grandsons. Besides a brief time at Saint Bernadette parish, David served at Saint Elizabeth Ann Seton and had so many wonderful experiences and made some amazing friends. He was particularly inspired by our late Deacon John Mostler and our wonderful pastor, Father Dumarsais. Always generous with his time, Deacon David touched many peoples’ lives through his homilies, his story-telling, through Baptisms, funeral prayer services, Scripture Studies and ministry to Villa Seton and Brennity. David had a way of making people feel comfortable. He will be remembered for his quick wit and infectious smile. But most of all as a kind, loving person. David will be deeply missed. Deacon David is survived by his loving wife, Virginia and by his three children, Theresa of Davie, Florida, Stephen of Coral Springs, Florida and Dori-Ann of Bothell, Washington and grandsons, Alexander, Jakob and Joseph and his niece, Theresa of Yonkers, New York and his nephews, as well as many wonderful, loving friends. In lieu of flowers, donations may be made to the St. Elizabeth Ann Seton Catholic Church Building Fund, Port St. Lucie, Florida.
See more See Less

In Memory Of Deacon David Bloom

A Mass of Christian Burial for Deacon David Bloom