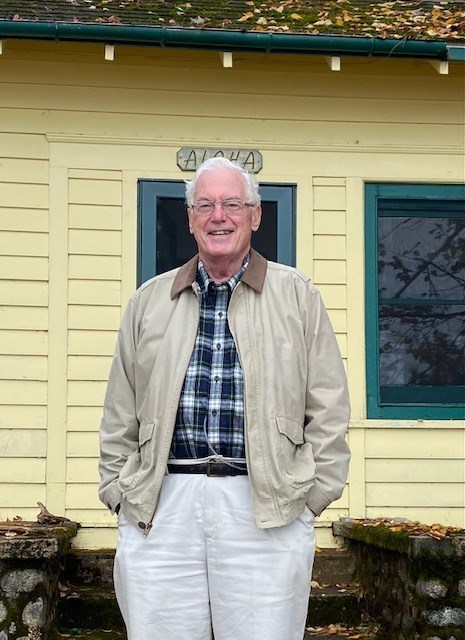 Friday, December 10 Richard “Dick” Terhune said goodbye to this world and strode into the light to rejoin the love of his life, Gretchen Reiche Terhune. Dick was 86 years awesome and a resident of OceanView in Falmouth, Maine. Despite the brief illness that laid him low at the end, he was a six-and-a-half-foot hunk blessed with good health, great humor, chronic curiosity and an affectionate, adoring personality that brightened the lives of his beloved family and many, many friends. Dick was born on January 5, 1935—Twelfth Night, as this literature lover liked to point out—at Doctor’s Hospital in New York City. The only son of Richard P. Terhune and Lillian Rauscher Terhune, he grew up on 496 Park Avenue in Leonia, New Jersey. Despite playing football and basketball at Leonia High sans spectacles, he managed to letter in both sports. Dick graduated from Cornell University in 1956 with a BA in American History & Government. He was a proud member of the Lambda Chi Alpha fraternity, and an admittedly so-so student who had the privilege of taking Intro to Russian Literature with the pre-Lolita Vladimir Nabokov. He also completed the 4-month 18th Program for Management Development at Harvard Business School in 1969. Dick served for 6 years in the 7th Regiment of the New York National Guard, earning the rank of Staff Sergeant (as well as the nickname Sergeant A-hole Giraffe). The most momentous event in his life occurred at a party in mid-town Manhattan in 1957, where he spied the beguiling auburn-haired Gretchen Reiche across the room and thought “I’m going to marry that woman.” And he did! Dick and Gretchen wed in Portland, Maine, on June 21, 1958, under the adoring eyes of Dick’s mother, Gretchen’s parents Howard C. Reiche and Laura Christine Knudsen Reiche, and a baleful portrait of then-vice-president Richard M. Nixon. After brief stints in Manhattan and Stamford, Connecticut, Dick and Gretchen settled in Darien, where they lived for nearly 50 years, and raised their sons Rich, Peter and Charlie, along with legendary housecats Widget, Runty, Amanda and Charcoal, aka Mr. Cartmell. Dick’s career was spent primarily in corporate banking and lending with a who’s-who of New York firms including the New York Trust Company, and the then Chemical Corn Exchange Bank. He retired in 1996 as a Senior Vice President and Director of the BZW Investment Division of Barclay’s Bank PLC. Dick was an Elder of First Presbyterian Church of Stamford and made many dear friends there. He served on the Investment Committee, and with Gretchen co-chaired the campaign to acquire the church’s noted pipe organ. Dick was also on the Board of Directors of the Darien Community Association. Following retirement and a move to Falmouth, Maine, Dick was honored to give back to the community as Director and Treasurer of the OcenView Residents Assistance Fund. And he felt blessed to be welcomed by Reverend Geoff Parker and the congregation of Foreside Community Church in Falmouth. Countless hours absorbing anecdotes of colorful ancestors from his Terhune and Rauscher grandparents kindled Dick’s lifelong passion for sharing family lore. This culminated in The Ribbon-Weaver’s Son, a compilation of Terhune history spanning three centuries. It’s a fun, fast-paced read full of intriguing characters and poignant reminiscences. And the crisp, lively prose is the next best thing to hearing him tell you these stories himself. Dick had a strong sense of himself as just one participant in a multi-character story stretching backward and forward in time. In Ribbon-Weaver’s forward he wrote, “you are not alone!” That comfort-from-connectedness explains why he enthusiastically encouraged his family and friends to delve into their own histories. It was also at the heart of his deep faith and study of scripture. All three—family, faith and scripture—consoled, comforted and buoyed him up to the very end. Dick is survived by his sons Richard P. Terhune Jr. and his wife Linda of Stamford; Peter Reiche Terhune and his wife Hilary of Portland; and Charles Robert Terhune and his wife Alice of Scarborough. Grandchildren include Richard P. Terhune III, Sarah Ann Terhune, James Emory Squiers Terhune, Benjamin Alexander Reiche Terhune, Penelope “Pea” Daisy Terhune, and Sophia Laura Terhune. He is also survived by his first cousin Martha Finlay and her children Beth, Dana and Brad, and their lovely families. Last but not least Dick is survived and mourned by Barney “Fiercefang” the Hemi-Manx, and Susannah Squirrel and her extended family. Dick was predeceased by Gretchen in 2019, who has been waiting for him to rejoin her so they can continue their loving journey together. A funeral and celebration of Dick’s wonderful life will be held at The Foreside Community Church, UCC on January 3, at 3:00pm. The service will also be available by live stream at www.foresidechurch.org by following the links to online worship. Dick will be laid to rest in Portland’s Evergreen Cemetery, rejoining Gretchen as well as her parents and grandparents. Dick’s family is grateful for the expert, compassionate care he received from the staff at Maine Med’s Cardiac ICU. Donations in his memory are warmly encouraged, and can be made to Foreside Community Church, or the charity of your choice.
See more See Less

In Memory Of Richard Paul Terhune