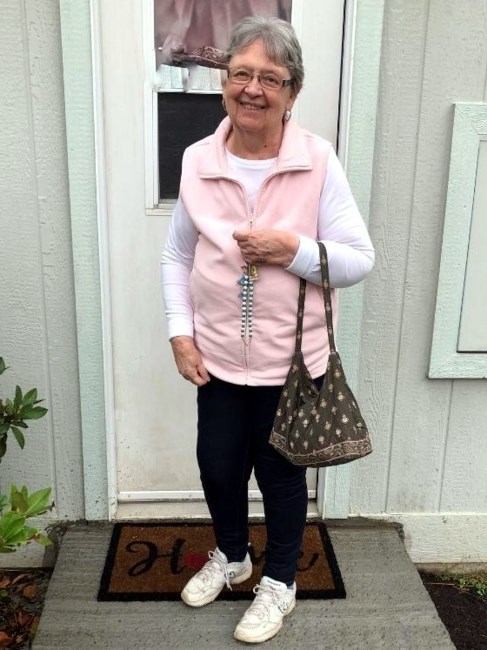 Carol Ann Harter L'Abbe, age 77, of Kelso, Washington, passed away on Monday, August 1, 2022, after a long fight against Alzheimer's disease. Carol was born February 14, 1945 in Portland, OR and raised in Beaverton, OR by her parents Perry & Evelyn Harter. She graduated from Sunset High School in 1963. Carol was a loving mother of two children, two grandchildren, and five great grandchildren. Carol is survived by her sister, Linda Darleen Harter Williams & (husband) James Lee Williams, of North Plains, OR; sons Larry & (wife) Roxanne Olsen of Kelso, WA; Scott & (wife) Darcy Olsen of Kelso, WA, with grandson Dylan & (wife) Glenna Olsen of Kelso, WA, with great grandchildren Atlas, Thatcher, & Melinda; and granddaughter Drew & (husband) Jared Parker of Kelso, WA, with great grandchildren Paul & Remy. She is also survived by many more beloved cousins, nieces, and nephews. Carol was preceded in death by her younger sister, Susan Harter Wiltsey. Carol's life ended peacefully at home under the care of her immediate family. She was loved by many and will be missed by all. A celebration of life event is being planned by the family for early October. More information will follow. A private burial for Carol will be held Wednesday, August 10, 2022 at Skyline Memorial Gardens Funeral Home, 4101 NW Skyline Blvd., Portland, OR 97229. Fond memories and expressions of sympathy may be shared at www.skylinememorialgardens.com for the L'Abbe family.
See more See Less

In Memory Of Carol Ann L'Abbe